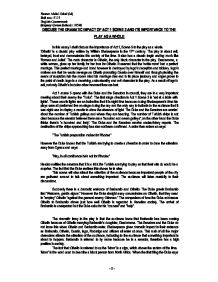 othello. DISCUSS THE DRAMATIC IMPACT OF ACT 1 SCENE 3 AND ITS IMPORTANCE TO THE PLAY AS A WHOLE

DISCUSS THE DRAMATIC IMPACT OF ACT 1 SCENE 3 AND ITS IMPORTANCE TO THE PLAY AS A WHOLE In this essay I shall discuss the importance of Act 1, Scene 3 to the play as a whole. 'Othello' is a classic play written by William Shakespeare in the 17th century. The play is about evil, betrayal, trust and demonstrates the society of the time. It also has a classic tragic ending much like 'Romeo and Juliet'. The main character is Othello, the only black character in the play. Desdemona, a white woman, gives up her family for her love for Othello. It seemed that the 'noble moor' had a perfect marriage. This perfect marriage and bond however is destroyed by Iago's deception and trickery. Iago's motives are that he wants revenge on Othello promoting Cassio over himself and through planting the seeds of suspicion into the moors mind his marriage dies and in its place jealousy and anger grows to the point of death. Iago is a deceiving, untrustworthy and evil character in the play. As a result of Iago's evil, not only Othello's but also other innocent lives are lost. Act 1 scene 3 opens with the Duke and the Senators in council, they are in a very important meeting about their enemy the "Turks". The first stage direction in Act 1 Scene 3 is 'set at a table with lights'. These candle lights are an indication that it is night time because during Shakespeare's time his plays were all preformed live on stage during the day and the only way to indicate to the audience that it was night was to display a candle to show the absence of light. The Duke and the Senators are worried about the number of Turkish galleys and where they are heading. The number of Turkish ships is not clear because the senator believes there are a 'hundred and seven galleys'; on the other hand the Duke thinks there's 'a hundred and forty'. ...read more.

Brabantio is saying that Desdomona deceived her own father and therefore may deceive him, Othello. This was to put doubts into Othello's mind but Othello still says: "My life upon her faith!" This shows that Othello trusts Desdemona, which completely changes when Iago puts lies into Othello's head. During the play the audience see that Othello is frequently referred by racial comments like "thick lips" and "sooty bosom." We even see the Duke making racist suggestions like "is far more fair than black." Not only the Duke, we see the love of Othello, Desdemona, use such language by calling Othello a "moor." What the audience might question is that, with all this racism going around doesn't Othello notice what is happening or is he concealing his awareness of racism? The answer to this maybe he is very aware of this racist society that's why he is very authoritative and controlling to suppress his feelings about racism and inability to cope with the truth. The audience see that the suppression of Othello's awareness of racism is important to the rest of the play because later in the play we see Othello being not that commanding. Is it because the racism was getting to him, his denial was backfiring? Ultimately did it lead to him killing Desdemona? The Duke advises Brabantio better to accept the truth than change nothing. Othello is ordered by the Duke to go to Cyprus; in addition Othello asks for Desdemona is to be with him on his journey, alongside with "honest" Iago. Shakespeare uses this scene as a device to send everyone off to Cyprus; Cyprus has been described as a "crucible;" cauldron where chemical impurities are heated and only pure elements are left afterwards. The characters are the substance's which are lit and heated up by the flame, Iago (Iago is the Devil incarnate. He does not do anything mystical but whispers to peoples mind and tells lies, similarly just like the devil. ...read more.

In this scene Shakespeare shows the theme of jealousy. We see Shakespeare show the jealousy of Iago envying Cassio. We also see how Othello is make easy of mistrust of Desdemona, fundamentally which does happen, the scene shows Othello's inadequacy and insecurity. What Shakespeare shows us is how people function in society, in this society Shakespeare shows the effect of racism and how racist a society can be and the results of its action. We see Othello towards the end of act 1 scene 3 say to Brabantio " My life upon her faith," ironic as he claims he will give his life if Desdemona deceives him vice versa at the end when he believes Desdemona being unfaithful Othello kills her. Thus inevitably he dies because of his own actions. In Act 1, Scene 3 we learn a lot about Othello's life because he explains how he was sold into the slave trade that in turn lead him to many of his adventures. All resulted to Desdemona falling in love with him. From Act 1, scene 3 the story is moved to Cyprus because of the battle against the Turkish in which Othello has been chosen to be general by the Duke. This was however a veil to cover the fact that Othello was being used. Soon as they are victorious the power is handed over to Cassio a white ex-lieutenant. The racism of the time is very evident in this play. Othello is called 'the moor' through out, something, which Othello does not react to indicating that this racist word must have been common. When Iago tells his plans to the audience the audience is naturally curious on how he is going to achieve this. However, his plan is the dramatic irony in the whole play. So Act 1, Scene 3 in a very important scene to the play because it consists of many issues which have a greater effect to future scenes with in the play! Name: Abdul Odud (M) Roll no.: 5115 English Coursework Stepney Green School: 10548 - 1 - ...read more.