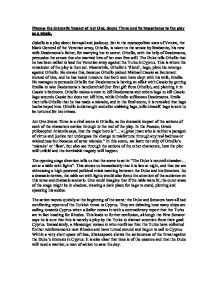 Discuss the dramatic impact of Act One, Scene Three and its importance to the play as a whole. Othello is a play about betrayal and jealousy. Set in the cosmopolitan state of Venice, the black General of the Venetian army, Othello, is taken to the senate by Brabantio, his new wife Desdemona's father, for marrying her in secret. Othello, with the help of Desdemona, persuades the senate that she married him of her own free will. The Duke tells Othello that he has been called to lead the Venetian army against the Turks in Cyprus. This is where the remainder of the play is then set. Meanwhile, Othello's 'friend', Iago, plots his revenge against Othello. He craves this, because Othello picked Michael Cassio as lieutenant instead of him, and he has heard rumours that both men have slept with his wife, Emilia. He manages to persuade Othello that Desdemona is having an affair with Cassio by getting Emilia to take Desdemona's handkerchief (her first gift from Othello), and planting it in Cassio's bedroom. Othello makes a vow to kill Desdemona and orders Iago to kill Cassio. Iago wounds Cassio but does not kill him, while Othello suffocates Desdemona. Emila then tells Othello that he has made a mistake, and in the final scene, it is revealed that Iago has betrayed him. Othello is distraught and after stabbing Iago, kills himself. Iago is sent to be tortured for his crimes. Act One Scene Three is a vital scene in Othello, as the dramatic impact of the actions of each of the characters carries through to the rest of the play. In the Poetics, Greek philosopher Aristotle says, that the tragic hero is "... ...read more.

Obviously this would have made Othello downhearted, but he is seemingly calm in his argument. He tells Iago to go and fetch Desdemona so she will come and speak to Brabantio. He tells the senate: "If you do find me foul in my report, The trust, the office, I do hold of you, Not only take away, but let your sentence Even fall upon my life." He is so sure that Desdemona will verify their love that he bets his position as general and even his life on her statement. At this point the audience are unaware of the situation between Othello and Desdemona and to them it could be possible that Othello could have used magic or drugs, as Brabantio suggests. However, they audience would find this unlikely now that their confidence has won by Othello's speech. Nevertheless, when Iago is sent to fetch Desdemona, the audience is oblivious to the possible outcome of the scene. The entrance of Desdemona gives a new perspective to the scene, as we are now able to find out her side of the story. She begins by talking to Brabantio and telling him how much she respects him and how she is bound to him. She then goes on to say that even though she is his daughter and therefore 'his property' by the standards of the time, she is now the wife to Othello and therefore must honour him more. In her quote: "I am hitherto your daughter. But here's my husband; And so much duty as my mother show'd To you, preferring you before her father, So much I challenge that I may profess Due to the Moor my lord." ...read more.

As Aristotle said, a tragic hero has a 'fatal flaw' and it is in this scene that Othello's flaw is revealed: his naivety and lack of understanding of human nature means Iago's plan to deceive him will work. This will lead to Othello's suspicions about Desdemona and ultimately her death and his suicide. Othello seems unaware of the racism of the people around him; his innocence of human nature means he assumes people accept him for what he is in the same way he accepts others. This is the first scene in the play where we truly get to know the character of Othello. He is presented as a brave and noble soldier whose war record is impeccable and who has the trust and admiration of the Duke, his leader. He is eloquent, humble, and we warm to him because of Desdemona's obvious love towards him. In Shakespeare's time, the audience would have been likely to have been inherently racist, by our standards, so Shakespeare presents him as a man above reproach, a man we have no choice but to admire and like. The scene sets up the circumstances to send everyone to Cyprus. Othello is sent to lead the army which means Cassio, Iago and others must follow him as he is their commander. Desdemona also wishes to accompany Othello and Roderigo follows Desdemona after what he and Iago talked about because he feels he has a chance of winning her. In conclusion, Act One, Scene Three, a very long scene by Shakespearean standards, sets up the characters and conflicts for the rest of the play, and foreshadows the tragic outcome. In Iago's dark closing couplet, he tells us his plan is "engender'd", or concieved. In the rest of the play, we will see the birth of the monster he creates and the tragedy that will ensue. by Matthew Smithies 10M ...read more.