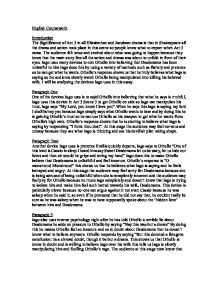 English Coursework Introduction The Significance of Act 3 in all Elizabethan and Jacobean drama is that in Shakespeare all the drama and action took place in this scene so people knew what to expect when Act 3 came. The audience felt tense and excited about what was going to happen because they knew that the main story line all the action and drama was about to unfold in front of their eyes. Iago uses many devices to con Othello into believing that Desdemona has been unlawful to him Iago does this by using a variety of methods such as flattery and pretence so he can get what he wants. Othello's response shows us that he truly believes what Iago is saying as the audience slowly watch Othello being manipulated into killing his beloved wife. I will be analysing the devices Iago uses in this essay. Paragraph One One of the devices Iago uses is to cajol Othello into believing that what he says is truthful, Iago uses this device in Act 3 Scene 3 to get Othello on side so Iago can manipulate his trust, Iago says "My Lord, you know I love you".When he says this Iago is saying my lord I shall betray you because Iago simply says what Othello wants to hear and by doing this he is gaining Othello's trust so he can use Othello as his weapon to get what he wants from Othello's high rank. ...read more.

The audience at this stage now know that Iago is no friend of Othello's he is simply a hateful villain who will do anything to get what he wants. Paragraph 4 Iago tends to through out the play repeat the same type of question over and over again, Iago says "Is't possible, my lord". By doing this Iago confuses Othello and leaves Othello speechless and not knowing how to respond or say, by doing this it makes it easier for Iago to manipulate Othello because Othello doesn't know what to believe or what to say. The audience at this stage feel sympathy for Othello because he doesn't know what to say or who to believe and it leaves him susceptible to Iago's devilish plan. Paragraph 5 Iago also withholds information, by doing this he makes Othello impatient and wanting to know what Iago is desperately hiding from him, Iago makes Othello feel this way by saying " Out of his scattering and unsure observance it were not for your quite nor your good nor for my manhood honesty or wisdom, to let you know my thoughts." Othello desperately wants to find out we know this when he says "What does thou mean? This shows that us Othello wants to find out the bigger picture and find out what Iago knows. ...read more.

the story from Iago and never asked Desdemona if this was true and never really gave her any time to explain or deny the atrocious claims. Paragraph 9 The place where Othello was set, really shows us what the play is about and adds to the drama and action of the play, Othello (The Play) starts off set in Venice and Venice in the sixteenth century was renowned for its music and its calm assuring atmosphere and it was were many found love and lived happily in Venice which really shows us what Othello felt for Desdemona and the atmosphere backed up the happiness Othello felt with Desdemona and as the set changed to Cyprus which is a small country almost isolated from any other countries. Othello began to feel rejected, annoyed and almost like he was cut off from others as if they didnt understand what he was going throught or how he felt after Iago manipulated him and twisted his mind. Othello felt as though he was in a world of his own and was isolated because no-one really understood how he was feeling, it showed us main objective of Iago's plan was complete to make Othello feel weak and make his mind fill with rage against Desdemona. The set tells us a lot about the storyline and how Othello felt, it plays a big part in the play. By Igor Gouveia ...read more.