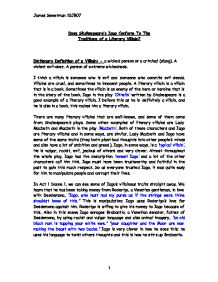 Does Shakespeare's Iago Conform To The Traditions of a Literary Villain? Dictionary Definition of a Villain: - a wicked person or a criminal (slang). A violent evil-doer. A person of extreme wickedness. I think a villain is someone who is evil and someone who commits evil deeds. Villains are cruel, and sometimes to innocent people. A literary villain is a villain that is in a book. Sometimes the villain is an enemy of the hero or heroine that is in the story of the book. Iago in the play 'Othello' written by Shakespeare is a good example of a literary villain. I believe this as he is definitely a villain, and he is also in a book, this makes him a literary villain. There are many literary villains that are well-known, and some of them come from Shakespeare's plays. Some other examples of literary villains are Lady Macbeth and Macbeth in the play 'Macbeth'. Both of these characters and Iago are literary villains and in some ways, are similar. Lady Macbeth and Iago have some of the same traits (they both plant bad thoughts into other people's minds and also have a lot of ambition and greed). Iago, in some ways, is a 'typical villain'. ...read more.

Jealousy is a main part of Iago's characteristic. It's as though he's addicted to jealousy and his fiendishness throughout the play soon turns to pure evil. His jealousy comes from different directions, them being his innate state of mind and also Cassio's job and handsome figure and looks. We know this as in one of his soliloquies he says - "framed to make women false" and this quote then reveals his jealousy towards Cassio. He also envies Cassio and Othello regarding Emilia. He thinks they are both sleeping with her, for example "for I fear Cassio with my night cap" this explains his fear of Cassio's and Emilia's love (though there isn't anything there). To prove that he thinks that Othello is sleeping with Emilia, "twixt my sheets, he's done my office" this shows he believes Othello has slept with Emilia. In the play I feel Iago is jealous of those in relationships filled with true love. He tries to fail those in love or just partners; the evidence towards this comes from his actions such as trying to separate Othello and Desdemona. Roderigo was in love with Desdemona and Iago just teased Roderigo about it. This goes to show he is jealous of those in love. ...read more.

When Othello first wed Desdemona, Brabantio said to Othello - "look to her moor if thou have eyes to see, she has deceived me and may deceive thee" this quote will always stay in the back of Othello's mind and Iago isn't really helping to abolish it. This leads to another one of Iago's villainous traits, conscience (he has none). Everything he does is for himself even if it ruins other people's lives, and he doesn't care unless it affects him and only him. He has no compassion for either Roderigo or Cassio and in the end he plots their ruin and death. In conclusion, Iago cleverly contrived the events of the play and I see him as a true literary villain, he manages to manipulate people for his own benefit. His jealousy controlled him. His scheming succeeded. And in the end he wound up speechless (refusing to speak at the end). Iago was jealous, and the only way to cure that jealousy was to destroy the person he envied. Someone with a good job, someone with a high ranking in the army, someone with a beautiful, loving wife and unquestionable respect from the people around him - someone like Othello, the Moor. ?? ?? ?? ?? James Sweetman 10JB07 1 ...read more.