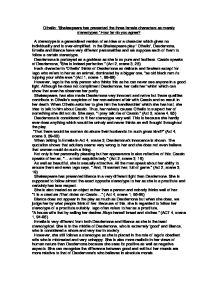 Othello: 'Shakespeare has presented the three female characters as merely stereotypes.' How far do you agree?

Othello: 'Shakespeare has presented the three female characters as merely stereotypes.' How far do you agree? A stereotype is a generalised version of an idea or a character which gives no individuality and is over-simplified. In the Shakespeare play ' Othello', Desdemona, Emelia and Bianca have very different personalities and we suppose each of them to follow a certain stereotype. Desdemona is portrayed as a goddess as she is so pure and faultless. Cassio speaks of Desdemona, "She is indeed perfection." (Act 2, scene 3, 25) Each character in 'Othello' thinks of Desdemona as delicate and flawless except for Iago who refers to her as an animal, dominated by a bigger one, "as old black ram /Is tupping your white ewe." (Act 1, scene 1, 88-89) However, Iago is the only person who thinks this as he can never see anyone in a good light. Although he does not compliment Desdemona, her calls her 'white' which can show that even he observes her purity. Shakespeare, has also made Desdemona very innocent and na�ve but these qualities contribute to Othello's suspicion of her non-existent affair with Cassio and so result in her death. When Othello asks her to give him the handkerchief which she has lost, she tries to talk to him about Cassio. Thus, her naivety causes Othello to suspect her of something she did not do. She says, "I pray talk me of Cassio." ...read more.

The fact that she is falling in love with a client proves that she is not expected her to be. "This is some minx's token, and I must take out the work?" (Act4, scene 1, 152) Also, when Bianca invites Cassio to her house for dinner, the audience are quite surprised as this is not how a typical prostitute would act. They would not usually follow their clients around or pursue them in this fashion. Desdemona plays a big part in 'Othello', as she is the wife of Othello and most of the play is about their relationship. The biggest impact she makes in the play is when she is disloyal to her father and elopes with Othello. Ironically, this is also when she breaks her stereotype and does not act pure and innocent. Also, when she lies to Othello about the handkerchief, it may be one of the only very small and minor sins she commits, but it turns Othello against her. "It is not lost" (Act 3, scene 4, 79) She also influences the injury of Cassio, though without knowing or doing anything wrong. Because of her supposed 'affair' with Cassio, Othello gives permission to Iago to wound and even kill him. Iago says, "And for Cassio, let me be his undertaker." (Act 4, scene 1, 206) ...read more.

For example, Cassio has a relationship with Bianca, but does like to be seen with her as this will damage his reputation. It shows that he wants Bianca but is secretly embarrassed and in a way, he is using her. Also, the way that Iago treats Emelia and even the way he talks about Desdemona and Bianca is very malicious. It shows that he has no respect for the women in the play. This shows the audience how conceited and arrogant he is. He talks of Bianca in a very cruel way; "A house wife that by selling her desires /Buys herself bread and clothes." (ACT 4, scene 1, 94-95) The fact that Othello feels that he should get rid of Desdemona because she might have committed adultery is very harsh. Especially when he knows that Cassio has also got a mistress but does not even consider Cassio as a sinner or contaminated in the same way as he feels about Desdemona. All in all, I do not agree that Desdemona, Emelia and Bianca are merely stereotypes in 'Othello', as they have a bigger impact and prove themselves to be more than what we assume each of them to be. Each audience has a different point of view on each character and judges them all differently, but at the end of the play, we all realise that the three women are much more complicated and individual than we thought at the start of the play. ...read more.