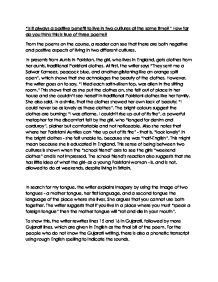 "Is it always a positive benefit to live in two cultures at the same time?" How far do you think this is true of three poems? From the poems on the course, a reader can see that there are both negative and positive aspects of living in two different cultures. In presents from Aunts in Pakistan, the girl, who lives in England, gets clothes from her aunts, traditional Pakistani clothes. At first, the writer says "They sent me a Salwar Kameez, peacock blue, and another glistening like an orange split open", which shows that she achnologes the beauty of the clothes. However, the writer goes on to say, "I tried each satin-silken top, was alien in the sitting room." This shows that as she put the clothes on, she felt out of place in her house and she couldn't see herself in traditional Pakistani clothes like her family. She also said, In a simile, that the clothes showed her own lack of beauty: "I could never be as lovely as those clothes". ...read more.

She ends happily by saying that "Every time I think I've forgotten, I think I've lost the mother tongue, it blossoms out of my mouth." Clearly this poem is about personal and cultural identity. The familiar metaphor of the tongue is used in a way to show that losing your language and culture is like losing part of your body. The poet's dream might be something she has really dreamt "overnight" but is clearly also a "dream" in the sense of something she wants to happen - in dreams, if not in reality, it is possible for the body to regenerate. For this reason the poem's ending is uncertain, it is only in her dream that the poet can find her "mother tongue". On the other hand, she may be arguing that even when she thinks she has lost it, it can be found again. At the end of the poem there is a metaphor in which the regenerating tongue is likened to a plant cut back to a stump, which grows and eventually buds, to become the flower which "blossoms out of" the poet's mouth. ...read more.

The "white's only inn" is elegant, with linen tablecloths and a "single rose" on each table. It is contrasted with the fast-food "working man's cafe" which sells the local snack "bunny chows". There is no tablecloth, just a plastic top, and there is nowhere to wash your hands after eating, "wipe your fingers on your jeans". In the third stanza, contrast is clearly shown, the smart inn "squats" amid "grass and weeds". The most important image in the poem is that of the "glass" which shuts out the speaker in the poem. It is a symbol of the divisions of colour, and class. As he backs away from it at the end of the poem, the man sees himself as a "boy again", who has left the imprint of his "small, mean mouth" on the glass. He wants "a stone, a bomb" to break the glass - he may wish literally to break the window of this inn, but this is clearly meant in a symbolic sense. He wants to break down the system, which separates white and black, rich and poor, in South Africa. ...read more.