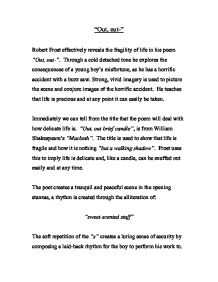 Out, out : How does Frost effectively reveal the fraglity of life in Out, out? Standard Grade English - achevied grade one

"Out, out-" Robert Frost effectively reveals the fragility of life in his poem "Out, out-". Through a cold detached tone he explores the consequences of a young boy's misfortune, as he has a horrific accident with a buzz saw. Strong, vivid imagery is used to picture the scene and conjure images of the horrific accident. He teaches that life is precious and at any point it can easily be taken. Immediately we can tell from the title that the poem will deal with how delicate life is. "Out, out brief candle", is from William Shakespeare's "Macbeth". The title is used to show that life is fragile and how it is nothing "but a walking shadow". Frost uses this to imply life is delicate and, like a candle, can be snuffed out easily and at any time. The poet creates a tranquil and peaceful scene in the opening stanzas, a rhythm is created through the alliteration of: "sweet-scented stuff" The soft repetition of the "s" creates a luring sense of security by composing a laid-back rhythm for the boy to perform his work to. ...read more.

Throughout the poem Frost uses a detached, impersonal tone, however regretfully states, "call it a day, I wish they might have said." This is the only point where he unveils emotion and we are forced to believe the seriousness of the situation. By the use of tone Frost illustrates how easily the accident could have been avoided, revealing the fragility of life. When the tragedy actually occurs the boy primarily does not realise the extent of his injury. His sister creates the boy's initial distraction by announcing "supper" and the saw: "leaped out at the boy's hand" Frost's word choice of "leaped" is an unusual but an effective way to describe the object. The saw is almost like a savage animal: it understood the calling of the meal and struck the boy's arm thinking it was its prey. In the end it was all determined by fate, if the boy was not called at that precise moment he might have lived. The actual disaster is not described in great detail: "but the hand!" This is the first time we are told any information regarding the accident. ...read more.

As we read on it is evident he may not pull through as "he lay and puffed his lips out with his breath", he is distinctly struggling to breathe and as his state worsens Frost's use of sentence structure vividly describes his death: "little-less-nothing!" In his use of punctuation the dashes imitate his fading heartbeat : each brief pause reflecting the rhythm of his slowing pulse. The truth is even though we were expecting this incident throughout the poem, we are shocked when it actually takes place, but the reality is everyone has his or her time. We will have our time to leave the world but cannot predict when this will be. To conclude, by exploring Robert Frost's "Out, out-", I found life is fragile and at any point it can be snatched away from us. This is shown through effective imagery and griping tone to tell the story of an unfortunate child having his hand removed by a buzz saw. The poem taught me to life to the full as we only have one chance. We all go at different times and in different, maybe unexpected, so must make the most of the time we have. ?? ?? ?? ?? ...read more.