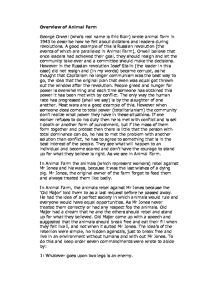 Overview of Animal Farm George Orwell (who's real name is Eric Blair) wrote animal farm in 1943 to describe how he felt about dictators and leaders during revolutions. A good example of this is Russian revolution (the events of which are paralleled in Animal Farm), Orwell believe that once leaders had achieved their goal, they should resign and let the community take over and a committee should make the decisions. However in the Russian revolution Josef Stalin (the leader in this case) did not resign and (in my words) became corrupt, as he thought that Capitalism no longer communism was the best way to go, the idea that the original plan that even was equal got thrown out the window after the revolution. People greed and hunger for power is overwhelming and each time someone has obtained this power it has been met with by conflict. The only way the human race has progressed (shall we say) is by the slaughter of one another. Most wars are a good example of this. However when someone does come to total power (totalitarianism) ...read more.

As Mr Jones never treated them correctly or had any respect fop the animals. Old Major had a dream that he and the others should rebel and stand up for what they believed. Old Major came up with a speech and suggested that the animals should break free and eat their fill when they felt like I, and not when it suited Mr Jones. The idea's of the rebellion were simple, no hidden agenda's, just to break free and live in an environment without humans and with out Mr Jones. To do this and keep order seven commandments were wrote to abide by: 1: Whatever goes upon two legs is an enemy. 2: Whatever goes upon for legs, or has wings is a friend. 3: No animal shall wear clothes. 4: No animal shall sleep in a bed. 5: No animal shall drink alcohol. 6: No animal shall kill any other animal. 7: All animals are equal. When the animals rebelled they felt like they could cope with anything, go against any odds and climb any mountain no matter how high, Morale was very high. ...read more.

I think he was waiting for boxer to stand up to Napoleon, but unfortunately he never, he just work harder and harder. Benjamin is a quiet, intelligent donkey who is a very good reader. He is he only one on Animal Farm who understands that the changes Napoleon make are for the worse. At the end of 'Animal Farm' the pigs are standing upright and wearing clothing, this is the main sign of communism truing to Capitalism, Stalin going against what he originally thought. This is a great example of what the novel is about, communism gone corrupt. The farm was originally called Manor Farm and is renamed that again at the end of the novel. Manor Farm - Animal Farm - Manor Farm. Capitalism - Communism - Capitalism. I believe that the farm was better off with Mr Jones because he fed them, even though he didn't feed them enough he still provided them with food on a regular basis, and would not prove to be their undoing. The rebellion did not work because Napoleon became corrupt and started to resemble a human. He disobeyed all seven commandments and did what was in his best interest, not the farms. ...read more.

The response given here is for a question focused on how Orwell creates the parallel of the Russian Revolution in his novel 'Animal Farm'. In it, the candidate refers to a number of parallelisms between the real life political event ...

The response given here is for a question focused on how Orwell creates the parallel of the Russian Revolution in his novel 'Animal Farm'. In it, the candidate refers to a number of parallelisms between the real life political event and the novel, showing a good understanding of analytical skills. I would like to see, as an improvement, more emphasis on the actual events of the novel with quotes, rather than the candidate paraphrasing on their own. Whilst this still shows a good understanding of the text, it is not sufficient evidence that they possess all the possible skills necessary to effectively analyse a text using the expected format. It would also be good practice to ensure that a full prose-style essay is written, with paragraphs as this is what is required of Standard English - making lists and sentences like "Capitalism - Communism - Capitalism" loses marks as the phrase could easily have been said in full sentences.

The Level of Analysis is fair, though there is possibly not enough exploration of the actual devices used or the terminology that recognises them. The literary devices must be identified as analysed; devices such as symbolism and naturalistic parallelism. As an analytical essay, there is no need for personal response e.g. - "I believe", "I think", etc. as the question concerns the effect on the audience/readers and therefore comments should be made thus: "[insert PEE (Point, Evidence & Explanation)] and the effect on the reader is that [...]". This way, the candidate is encouraging a direct focus on the intended audience of the novel/play/magazine/etc.

The Quality of Written Communication is poor. There are frequent misuses of grammar and spelling is frequently inaccurate to the point that some sentences become ambiguous. This is not tolerable at a GCSE level and should be rectified with practise of the candidate's written clarity, paying close attention to small errors like "[Joseph Stalin] became corrupt, as he thought that Capitalism no longer communism was the best way to go", which features two missed commas that should be either side of "no longer Communism". Candidates should also avoid colloquialisms like "best way to go". There is an expectation that the candidate will write with Standard English and this expectation must be met.