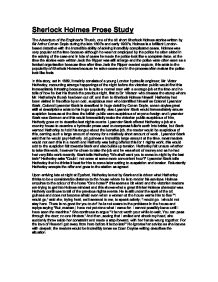 Sherlock Holmes Prose Study The Adventure of the Engineer's Thumb, one of the 56 short Sherlock Holmes stories written by Sir Arthur Conan Doyle during the late 1800's and early 1900's, Holmes is a brilliant London-based detective with the incredible ability of solving incredibly complicated cases, Holmes was very popular at the time because although he was not employed by the police he often aided in the solving of the case and in lots of cases he made the police look like a complete farce, at the time the stories were written Jack the Ripper was still at large and the police were often seen as a farcical organisation because time after time Jack the Ripper evaded capture, this adds to the popularity of Sherlock Homes because he solve cases and in the process often makes the police look like fools. In this story, set in 1889, it mainly consists of a young London hydraulic engineer, Mr. Victor Hatherley, recounting strange happenings of the night before the victorian public would find this immeadiately intresting because he is quite a normal man with a average job at the time and he tells of how he lost his thumb the previous night, first to Dr. Watson who dresses the stump where Mr. Hatherley's thumb has been cut off, and then to Sherlock Holmes himself. Hatherley had been visited in his office by an odd, suspicious man who identified himself as Colonel Lysander Stark, Colonol Lysander Stark is described in huge detail by Conan Doyle, conan doyles great skill at descriptions adds to his huge popularity, also Lysander Stark would immeadiately arouse suspicion because at the time the british public were suspicious of anyone foreign and Lysander Stark was German and this would immeadiatly make the victorian public suspicious of him, Hatherly goes on to describe last nights events. Lysander Stark offered Hatherley a job at a country house to examine a hydraulic press used to compress fuller's earth into bricks, but Stark warned Hatherley to ...read more.

This is what the victorians like most about Homes is his ability to solve crimes quickly and make the police look farcical. Ironically, the press was destroyed when Hatherley's lamp was crushed inside it, setting the machine on fire and ruining the criminals' operation and house. This case is one of the few where Holmes fails to catch the criminals and bring them to justice. In the final problem Conan Doyle immeadiatly grabs the readers attention with the opening sentence "It is with a heavy heart that I take up my pen to write these the last words in which I shall ever record the singular gifts by which my friend Mr. Sherlock Holmes was distinguished." this leads the reader to assume the worst could happen, and this makes the reader, regretably want to read on. Holmes arrives at Dr. Watson's house one night and is acting as if afraid, Watson notices this and asks "You are afraid of something?" Holmes replys and say he is scared of being shot. Holmes then asks if Watson has heard of Proffessor Moriaty Watson says he has not. Holmes has been tracking Moriarty for months and is on the brink of catching Moriaty and taking him to the courts. Moriarty is the leader of a criminal organisation and Holmes would consider it the crowning achievement of his career if he could capture Moriarty Holmes considers Moriarty intellectually equal to himself . The tension is building and the reader can sense this, and Holmes refers to Moriarty as "the napoleon of crime". Holmes asks Watson to come to europe with him, giving him clear instructions saying "You will despatch whatever luggage you intend to take by a trusty messenger unaddressed to Victoria to-night. In the morning you will send for a hansom, desiring your man to take neither the first nor the second which may present itself. Into this hansom you will jump, and you will drive to the Strand end of the Lowther Arcade, handling the address to the cabman upon a slip of paper, with a request that he will not throw it away. ...read more.

He then rushed to climb back down the cliff, then, when he was at the bottom, Holmes ran for his life. He spent a few years travelling around the world, but was persuaded back to London by news of this Adair murder. The readers no longer are upset and are exstatic that Holmes has returned alive and that he had won over Moriarty, even if the tale of how he did it was a bit farfetched, he is alive and the readers liked this. The story continues with Holmes and Watson solving the murder of Adair and the person who murdered Adair was Colonel Moran, the very same person that through rocks at Holmes whilst he was trying to escape at Reichenbach Falls. The motive for murder thought by Holmes is that Adair caught Moran cheating at cards and threatened to expose Moran's cheating, Moran the criminal he is made a living of playing crooked cards, so Moran just killed Adair there and then, Apparently. Although all Sherlock Holmes adventures were set ove 100 years ago I still see the storys i have read as a good intresting read, and i can easily understand why the Sherlock Holmes were so popular in their day, the plot in general is good and the ways Sherlock Holmes solves the cases show the writer himself was incredibly smart himself, also Conan Doyles great use of descriptive language makes you actually feel like you are there and in the days when there was no radio or television this was the best form of entertainment. I can also see why the victorian public found these storys intresting because they were set in the days when Jack The Ripper was at large and Sherlock Holmes often dropped subtle comments regarding the polices incompitence, the victorian readers loved this. I personally like the Sherlock Holmes storys and i can see why these storys were so popular in the late 1800's and i think if they were they were released nowadays they would still be popular today. ...read more.