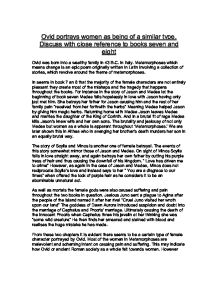 Ovid portrays women as being of a similar type. Discuss with close reference to books seven and eight

Ovid portrays women as being of a similar type. Discuss with close reference to books seven and eight Ovid was born into a wealthy family in 43 B.C. in Italy. Metamorphoses which means change is an epic poem originally written in Latin involving a collection of stories, which revolve around the theme of metamorphoses. In seems in book 7 an 8 that the majority of the female characters are not entirely pleasant they create most of the mishaps and the tragedy that happens throughout the books. For instance in the story of Jason and Medea iat the beginning of book seven Medea falls hopelessly in love with Jason having only just met him. ...read more.

We are later shown this in Althea who in avenging her brother's death murders her son in an equally brutal way. The story of Scylla and Minos is another one of female betrayal. The events of this story somewhat mirror those of Jason and Medea. On sight of Minos Scylla falls in love straight away, and again betrays her own father by cutting his purple tress of hair and thus causing the downfall of his kingdom. " Love has driven me to crime" However, as again in the case of Jason and Medea, Minos does not reciprocate Scylla's love and instead says to her " You are a disgrace to our times" when offered the lock of purple hair as he considers it to be an abominable unnatural act. ...read more.

From these two chapters it is evident there seems to be a certain type of female character portrayed by Ovid. Most of the women in Metamorphoses are malevolent and scheming intent on causing pain and suffering. This may indicate how Ovid or ancient Roman society as a whole felt towards women. However there are exceptions to this rule, not every female character is made out to be evil. In the case of Procris who is blissfully happily and loyal, with Cephalus before the interference of Aurora and in the case of Baucis who is greatly rewarded by the gods for her piety and her generosity towards the gods. ...read more.