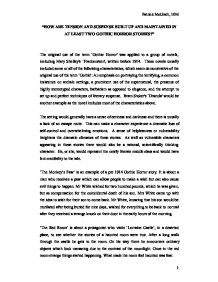 Ow Are Tension and Suspense Built Up and Maintained In At Least Two Gothic Horror Stories?&quot;

"HOW ARE TENSION AND SUSPENSE BUILT UP AND MAINTAINED IN AT LEAST TWO GOTHIC HORROR STORIES?" The original use of the term `Gothic Horror' was applied to a group of novels, including Mary Shelley's `Frankenstein', written before 1914. These novels usually included some or all of the following characteristics, which seem demonstrative of the original use of the term `Gothic': An emphasis on portraying the terrifying, a common insistence on archaic settings, a prominent use of the supernatural, the presence of highly stereotyped characters, barbarism as opposed to elegance, and the attempt to set up and perfect techniques of literary suspense. Bram Stoker's `Dracula' would be another example as the novel includes most of the characteristics above. The setting would generally have a sense of eeriness and darkness and there is usually a lack of an escape route. This can make a character experience a dramatic loss of self-control and overwhelming emotions. A sense of helplessness or vulnerability heightens the dramatic climaxes of these stories. As well as vulnerable characters appearing in these stories there would also be a rational, scientifically thinking character. He, or she, would represent the newly literate middle class and would have lent credibility to the tale. 'The Monkey's Paw' is an example of a pre 1914 Gothic Horror story. It is about a man who receives a paw which can allow people to make a wish but can also cause evil things to happen. Mr White wished for two hundred pounds, which he was given, but as compensation for the coincidental death of his son. Mrs White came up with the idea to wish for their son to come back. Mr White, knowing that his son would be mutilated after being buried for nine days, wished for everything to be back to normal after they received a strange knock on their door in the early hours of the morning. ...read more.

There are three pages of text that is about the protagonist entering the red room. This can help give a creepy effect because it is describing how dark and scary the passage way to the red room was. It helps set the scene and also keeps the reader in suspense. The colours described in 'The Red Room' are important because they help add to the creepy effect. They are effective because black is a common colour in Gothic Horrors, it makes the place sound like a dark and creepy place. The 'silver illumination' also adds to the effect because it tells us that the characters can just about see some of the objects in the room thanks to the light reflected from the moon. Silver is unreal looking, it is mystical. It shows how the character of 'The Red Room' feels scared or curious, as he can just about see the outlines of the different objects, giving the reader an image of the room and its contents. Red is possibly the colour of the room hence the name 'red room'. Red is a classic gothic colour as it can represent blood. There is also some black but mainly up the chimney. They help give the effect of a dark and creepy room. Tension is built by the descriptions of the darkness. "Stood with the candle held aloft." This shows that the room is dark because a candle is needed to light the room. "With its shadowy window bays." "Looking around that large sombre room." "My candle was a little tongue of light in its vastness that failed to pierce the opposite end of the room." These are quotes from the story which suggest that it is dark. They all keep the reader in suspense as they prolong them from getting to the main part of the story. Once in the room, suspense is maintained: the red room can be seen as a large room as it is described by having an "ocean of mystery." ...read more.

'It moved'." This shocked Mr White as the monkey's paw moved after his wish. He felt a loss of control and let an eerie cry just as there was a loud crash from the piano. This can add to the tension as whenever a character experiences something spine-shilling they would usually lose control, leading to them have powerful emotions described. This can interest the reader as these methods of writing stories were aimed at the people in the Victorian times, people who enjoyed these types of descriptions. The writers of these stories use a style of writing with sentences such as: "eight-twenty-years, I have lived, and never a ghost have I seen as yet." This style is an archaic English style of writing. The writer uses it because it helps add to the chilling atmosphere. The writers would also use extended metaphors. In 'The Cone' there is: "and were suddenly extinguished one by one in the throat of the tunnel which, with the last, seemed to swallow down the train, smoke and sound in one abrupt gulp." It would make the tunnel look like a living monster, greedily devouring everything around it. Similes are also commonly used in Gothic Horror stories. "Red and hot as sin," and "white as death." These are examples of similes from 'The Cone'. They are unnerving and they give 'hellish' imagery. In conclusion, Gothic Horror stories give readers something to enjoy. These stories can be chilling, horrific as well as exciting at the same time. These texts made the people of the Victorian era feel proud to be a Victorian, they had just come out of the Industrial Revolution which made them become more intelligent and more rational. It shows how the people of those times had matured. These texts helped me to understand the people of the Victorian era, and also the people before the Industrial Revolution, and how they became more educated, how they became more scientifically thinking and more rational. It allows me to see the difference between the times they were living in and the present times. Patrick McGrath, 10M 1 ...read more.