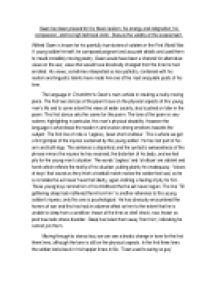 Owen has been praised for his bleak realism, his energy and indignation, his compassion, and his high technical skills. Discuss the validity of this assessment.

﻿Owen has been praised for his ?bleak realism, his energy and indignation, his compassion, and his high technical skills?. Discuss the validity of this assessment. Wilfred Owen is known for his painfully true stories of soldiers in the First World War. A young soldier himself, he composed poignant and accurate details and used them to mould incredibly moving poetry. Owen would have been a channel for alternative views on the war, views that would have drastically changed from the time he had enrolled. His views, sometimes interpreted as less patriotic, combined with his realism and linguistic talents have made him one of the most enjoyable poets of his time. The language in Disabled is Owen?s main vehicle in creating a really moving piece. The first two stanzas of the poem focus on the physical aspects of this young man?s life and to some extent the views of wider society, also touched on later in the poem. This first stanza sets the scene for this poem. The tone of the poem is very solemn, highlighting in particular, this man?s physical disability. However the language is what draws the reader in and evokes strong emotions towards the subject. The first line of note is ?Legless, Sewn short at elbow?. This is where we get a first glimpse of the injuries sustained by the young soldier. He has lost part of his arm and both legs. ...read more.

The next two stanzas discuss the emotional aspects of War and its affect on people, mainly focusing on the reasons why he joined up, and we see him evaluate the choices he made. Stanza three discusses the affects war has had on his youth. ?For it was younger than his youth, last year? explains how the war has aged him. By adding ?last year? to the end of the sentence it illustrates he is stripped of his youth and innocence because of the war. His baby face has been changed and carved into a harden war victim. It makes him sound old even though the oldest he might have been was around 22 years old. As the reality of warfare sunk in, he ?lost his colour? and subsequently his vitality when he ?poured it down shell holes till the veins ran dry?. This last phrase is particularly stirring, as the use of the word ?poured? indicates he did so willingly, like it was his fault he lost his vitality. In some respects he is, and this is discussed in stanza four, where he looks back on the night he signed up. Stanza four is all about the honour and glory that being involved in war would bring to the young man. In stanza four the poet explores these ideas of why the soldier chose this life, suggesting it was to become a hero, ?carried shoulder high? like he was after his football matches. ...read more.

We are reminded of the grief he will feel for the rest of his life. As he spends ?a few sick years in institutes?. You see the soldier realise that he will never have the freedom he used to, and will have to ?do what things the rules consider wise?. He realises he will never find love, when he sees the women?s eyes pass to ?the strong men that were whole?. The young soldier now feels nobody cares for him and questions ?why don?t they come?? This shows a longing for exception and emersion back into normal society. The structure really lends its self to this poem. It?s quite simple, but the glimpses into the past, which are then followed by explanations to his present situation, and helps us to understand. It starts off in the present, giving us a quick insight into the unhappy life of this soldier. It then takes us to his past for a short while so we are able to experience and see the pain and loss he feels for what he used to have. Towards the end of the poem we see a glimpse of the future for the injured service man, and how lonely his life will be, all because of his mistake. Wilfred Owen?s strong ideas of realism, his talents and his personal insights into the life of a soldier I can confirm that Wilfred Owen has successful created some of the most beautiful poetry on the topic of World War One. He is, indeed, a most talented and compassionate poet. Amber Hoskins 10S Word Count: 1499 ...read more.