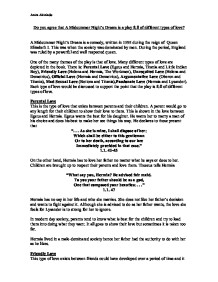 Do you agree that A Midsummer Night's Dream is a play full of different types of love? A Midsummer Night's Dream is a comedy, written in 1595 during the reign of Queen Elizabeth I. This was when the society was dominated by men. During the period, England was ruled by a powerful and well respected queen. One of the many themes of the play is that of love. Many different types of love are depicted in the book. There is: Parental Love (Egeus and Hermia, Titania and Little Indian Boy), Friendly Love (Helena and Hermia, The Workmen), Unrequited Love (Helena and Demetrius), Official Love (Hermia and Demetrius), Argumentative Love (Oberon and Titania), Mad Sexual Love (Bottom and Titania),Passionate Love (Hermia and Lysander). Each type of love would be discussed to support the point that the play is full of different types of love. Parental Love This is the type of love that exists between parents and their children. A parent would go to any length for their children to show their love to them. This is shown in the love between Egeus and Hermia. Egeus wants the best for his daughter. He wants her to marry a man of his choice and does his best to make her see things his way. ...read more.

Although they all have different professions, they know each other well and able to tell which character would fit them well. When it was being decided who plays who, there is a bit of argument between them. For instance, Quince was giving out the parts and Bottom wants to play the lion too. Quince replies by saying, "And you would do it terribly, you would fright the Duchess and the ladies that they would shriek; and that were enough to hang us all." 1.2.60-62 Another thing is that they call each other by name and that gives indication that they know each other well. Unrequited Love Unrequited, love is another aspect to the theme of love in the play. This is when A loves B, but B does not love A. This is the situation between Helena and Demetrius. Helena is deeply in love with Demetrius but he has not noticed her. Helena says of him, ". . . And as he errs, doting on Hermia's eyes, So I, admiring of his qualities. . . ." 1.1.230-231. Helena wants to make sure that she gets Demetrius to notice her and would do anything to make him see that she loves him. ...read more.

Mad Sexual Love In the play, Bottom and Titania have the shortest relationship, but the time they spend together is long enough to show how ridiculous love can sometimes turn out to be. "And thy fair virtue's force perforce doth move me On the first view to say, to swear, I love thee." 3.2.117-118 Titania falls madly in love with Bottom, due to the "Love Juice" that Oberon put on her eyes. Straight after she sees him, she is ready to jump into bed with him. Today, many people would find this disgusting and outrageous. But it is fiction, so anything can happen. Especially when you are under a magical spell. Passionate Love "So will I grow, so live, so die my lord, Ere I will yield my virgin patent up Unto his lordship, whose unwished yoke My soul consents not to give sovereignty." 1.1.79-82 Hermia does not love Demetrius. She would rather die or become a nun, than marry him. She only has eyes for one man, Lysander. And he feels exactly the same way about her. When they are together, you can see that the love between them is really strong. So she is quite surprised when he is suddenly in love with Helena. As a result of the "Love Juice", Lysander falls in love with Helena, and becomes infatuated and obsessive. Anita Akinlade ...read more.