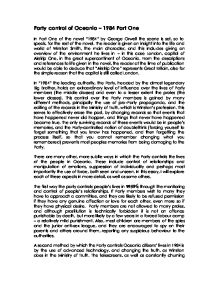 Party control of Oceania - 1984 Part One

Party control of Oceania - 1984 Part One In Part One of the novel "1984" by George Orwell the scene is set, so to speak, for the rest of the novel. The reader is given an insight into the life and world of Winston Smith, the main character, and this includes giving an overview of the environment he lives in - in this case London, capital of Airstrip One, in the great supercontinent of Oceania. From the descriptions and references to life given in the novel, the reader at the time of publication would be able to deduce that "Airstrip One" represents Great Britain, also for the simple reason that the capital is still called London. In "1984" the leading authority, the Party, headed by the almost legendary Big Brother, holds an extraordinary level of influence over the lives of Party members (the middle classes) and even to a lesser extent the proles (the lower classes). This control over the Party members is gained by many different methods, principally the use of pro-Party propaganda, and the editing of the records in the Ministry of Truth, which is Winston's profession. This serves to effectively erase the past, by changing records so that events that have happened never did happen, and things that never have happened become true. ...read more.

extraordinarily advanced technology - they can monitor the citizens' thoughts, and you can be arrested for merely thinking something which is not in praise of the Party. In Winston's workplace, the Ministry of Truth, the memory hole is used to eliminate records which are no longer true, so that the Party's version of truth cannot be contradicted, and the speakwrite, which Winston also uses at his job in the Ministry of Truth, is also an advanced piece of technology. A third method of control used by the Party is control of the language, using the Party regulated language "Newspeak". This is referred to by Syme as "the only language in which the vocabulary gets smaller year by year". The Party's aim is to reduce the vocabulary to such an extent that it is impossible for thoughtcrime to be committed, as people will have no words with which to express it. This shows how great the control of the party over the ordinary people is, as they can prevent people from doing what they do not want them to do simply by not giving them the necessary vocabulary to do so. Other methods of control used by the Party are emotional manipulation and suppression of individuality. There are many compulsory community events, such as the two minute hate, and the non-compulsory public hangings and propaganda films. ...read more.

The reason for this seems the same as the reason for the argument between the proles about saucepans which is also mentioned - by keeping people focused on small, insignificant parts of day-to-day life you can prevent them from thinking about things the Party would prefer them not to be considering. In general, I think that in Part One of 1984, George Orwell sets the scene for the rest of the novel by outlining the Party control over everyone's thoughts and actions, which becomes very significant later in the novel. I think this is very effective, because it mentions some things briefly which will be explained in more detail later in the novel, thus maintaining the reader's interest and giving them something they can look back to when they read further on. I think that Part One of 1984 is very interesting, as it explores a society which is completely different to ours in Great Britain today, but which is still believable, and indeed almost the same as North Korea in our modern-day society, nearly 60 years after the novel was published for the first time. I think that 1984 is a novel which is significant in modern society, as it shows how serious a regime such as that of Oceania can be, and how damaging an effect it can have on society. ?? ?? ?? ?? ...read more.