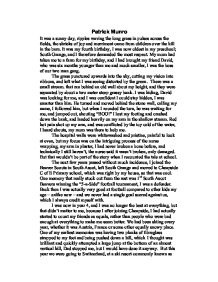 It was a sunny day, ripples waving the long grass in pulses across the fields, the shrieks of joy and merriment came from children over the hill in the barn. It was my fourth birthday, I was now oldest in my preschool; South Grange, and I therefore demanded the most respect. My mum had taken me to a farm for my birthday, and I had brought my friend David, who was six months younger than me and much smaller, I was the boss of our two man gang.

The grass punctured upwards into the sky, cutting my vision into ribbons, and left what I was seeing distorted by the green.  There was a small stream. that ran behind an old wall about my height, and they were separated by about a two meter steep grassy bank. I was hiding, David was looking for me, and I was confident I could stay hidden, I was smarter than him. He turned and moved behind the stone wall, calling my name, I followed him, but when I rounded the turn, he was waiting for me, and jumped out, shouting “BOO!” I lost my footing and crashed down the bank, and landed heavily on my arm in the shallow stream. Red hot pain shot up my arm, and was conflicted by the icy cold of the water, I heard shouts, my mum was there to help me.

The hospital walls were whitewashed and pristine, painful to look at even, but my focus was on the intriguing process of the nurse wrapping, my arm in plaster, I had never broken a bone before, and technically I still haven’t, the nurse said it wasn’t broken, only damaged. But that wouldn’t be part of the story when I recounted the tale at school.

The next few years passed without much incidence, I joined the Beaver Scouts in South Ascot, left South Grange and moved to Cheapside C of E Primary school, which was right by my house, so that was cool. One memory that really stuck out from the rest was 1st South Ascot Beavers winning the “5-a-Side” football tournament, I was a defender. Back then I was actually very good at football compared to other kids my age – unlike now – and we never had a single goal scored against us, which I always credit myself with.

I was now in year 4, and I was no longer the best at everything, but that didn’t matter to me, because I after joining Cheapside, I had actually started to count my friends as equals, rather than people who were bad enough at everything to make me seem better. We had been skiing every year, whether it was Austria, France or some other equally snowy place. One of my earliest memories was having two planks of fibreglass strapped to my feet and being pushed down a hill, which I thought was brilliant and quickly attempted a large jump at the bottom of an almost vertical hill, Dad stopped me, but I would have done it anyway.  But this year we were going to Switzerland, at a ski resort commonly known as Mürren. I was going with a friend, Charlie, who went to my school, and we had a great week tearing down hills on fragile planks, fast enough to make trees blur.

Later In that year, we also went to Durban in South Africa, to visit my Aunt Cathy, Uncle John and my three cousins, Gary, Max and Nikki. All three of them were at least seventeen, and were great fun, taking us to the lake to be pulled along in inflatable rings by their motorboat; “Cocktail”.

We went to Africa several more times over the next few years, but we took a long break from it once I joined Ranelagh secondary school. In one year group at Ranelagh there was more people than in the entire of Cheapside, so I was easily lost and I missed registration several times as I just couldn’t remember where our room was. I had gone from the oldest to the youngest in one giant step. Everyone was busy, and rushing around like there was something nasty chasing them.

It was the end of year eight, in the summer holidays when we went to Africa again, we stayed on my Aunt and Uncles farm, and I must’ve drunk over twenty litres of coke in the eight days we stayed there. My cousins had all moved out, two of them were married; Nikki and Gary, but we had a massive party with all the family friends such as Pete Goss, tall, loud, and seemingly permanently drunk. Most the Group fitted this description, and we nearly had Kingsley Holgate, a friend of my uncles, who is now famous, to turn up.        The whole afternoon and evening was pretty much all of the wives sitting indoors chatting, and all of the guys around the outdoor bar playing cards, and drinking- I used coke.

I went back to school again in year 9, and had a boring time as usual, and it was around that time that the news came, my cousin Gary had been shot in a car jacking in Durban, and had died. The next few weeks seemed to pass like a dream, Gary shouldn’t be dead, he was only in his early twenties, the reality still hasn’t really hit home.

SATs at the end of year nine were pretty much what they said on the tin; Stupid And Time-wasting, so I didn’t revise, and my results proved that I didn’t need to; I scored high grades in everything. I am now at the end of the first of my year ten terms, and have started my GCSE’s, which I plan on taking more seriously than my SATs.