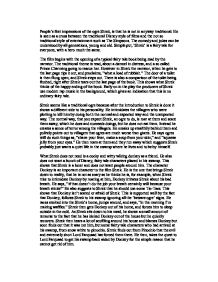 People's first impressions of the ogre Shrek, is that he is not in anyway traditional. He is seen as a cross between the traditional Disney style of films and the not so traditional style of entertainment such as The Simpsons. The comedy and jokes can be understood by all generations, young and old. Simple put, 'Shrek' is a fairy tale for everyone, with a hero much the same. The film begins with the opening of a typical fairy tale book being read by the narrator. The traditional theme is read, about a damsel in distress, and a so called Prince Charming going to rescue her. However in Shrek the narrator, when he gets to the last page rips it out, and proclaims, "what a load of rubbish." The door of a toilet is then flung open, and Shrek steps out. There is also a comparison of the toilet being flushed, right after Shrek tears out the last page of the book. This shows what Shrek thinks of the happy ending of the book. ...read more.

He says, "if that doesn't do the job your breath certainly will because your breath stinks!" He also suggests to Shrek that he should use some Tic-Tacs. This shows that Donkey isn't scared or afraid of Shrek. This is supported well by the fact that Donkey, follows Shrek to his swamp ignoring all the 'beware ogre' signs. He races excited into the Shrek's home, jumps around, and says, "in the morning I'm making waffles." Shrek then gets Donkey out of his home, and forces him to sleep outside in the cold. As Shrek sits down to his meal, he shows a small amount of remorse to the fact that he has kicked Donkey out of the house but he quickly recovers. Shrek then hears a lot of scuffling around his house and blames Donkey but soon finds out that it was not him, but some fairty tale characters who had arrived at his swamp, from snow white to pinochio. Shrek finds out from Pinochio that the evil and extremely short Lord Farquaad has forced them there. ...read more.

It gives him the look of a tall, mean ogre who means business. The high angle shots are used when Shrek and Donkey enters the village. They look up at the castle and it shows the size of it. This in turn shows how wealthy Lord Farquaad is. Mid angle shots are used to show characters talking and socialising, and it puts them on equal footing. It shows neither of them higher or lower than the other. For example when Shrek and Donkey are lying down together or when Shrek cooks Fiona a meal. This gives people the chance to see the characters interacting with each other and gives the audience the chance to get to know there characters better. There are good mixtures of shots as well. For example when Lord Farquaad is first shown in the film, it uses a combination of shots rather than a full on shot. This is done to disguise his height and create tension. The first shot the audience see is of his hands rather than his face. He puts on a pair of gloves as if he means business. It is shots like these that build up the crucial first opinion of the character. ...read more.