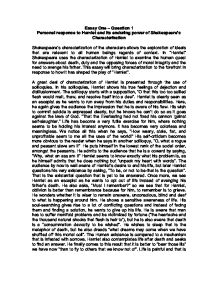 Essay One - Question 1 Personal response to Hamlet and its enduring power of Shakespeare's Characterization Shakespeare's characterization of the characters allows the exploration of ideals that are relevant to all human beings regards of context. In "Hamlet" Shakespeare uses the characterization of Hamlet to examine the human quest for answers about death, duty and the opposing forces of moral integrity and the need to avenge his father. This essay will bring characterization to the forefront in response to how it has shaped the play of "Hamlet". A great deal of characterization of Hamlet is presented through the use of soliloquies. In his soliloquies, Hamlet shows his true feelings of dejection and disillusionment. The soliloquy starts with a supposition, "O that this too too sullied flesh would melt, thaw, and resolve itself into a dew". Hamlet is clearly seen as an escapist as he wants to run away from his duties and responsibilities. Here, he again gives the audience the impression that he is aware of his flaw. ...read more.

He shows a sensitive awareness of life. His soul-searching gives rise to a lot of conflicting questions and instead of facing them and finding a solution, he wants to give up his life. He is aware that man has to suffer manifold problems and be victimized by fortune ("the heartache and the thousand natural shocks that flesh is heir to'), but he is also aware that death is a "consummation devoutly to be wished". He wishes to sleep that is the metaphor of death, but he also dreads "what dreams may come when we have shuffled off this mortal coil". The Human existence is compared to a mechanism that is infested with sorrows. Hamlet also contemplates life after death and seeks to find an answer. He finally comes to this result that it is better to "bear those ills" we have now "than to fly to others that we know not of". Life is painful and that is a known reality. ...read more.

It is clear to see that Hamlet is a confused individual who has been greatly affected by the events in his life that led him up to the point where he has to usurp a role that is clearly unfit for him. It can be suggested that Hamlet is a grown man and should be able to deal with such issues without being held back or put into danger by hasty and na�ve decisions. This relates to the idea that he should be fully aware of the fate he has devoted himself to, as he is an actor with the full knowledge of the story of the tragic hero. To conclude, the characterization of Hamlet in relation to the enduring power of Shakespeare's play is an understanding of the complexities of the character. Not only does Hamlet represent an ordinary man who wants revenge but also a man struggling to survive with a fatal flaw - procrastination over action. It is evident that throughout the progression of the play of "Hamlet" the character, Hamlet deals with many difficulties which both ultimately lead to his progression throughout the play and unfortunately his demise. ...read more.

This is an excellent essay which shows a very good understanding of the text and context. The writer uses well selected quotes and generally integrates these effectively. The essay makes a number of different, well developed points. *****