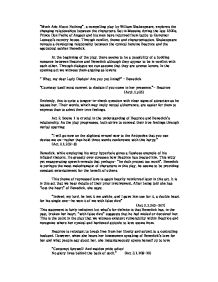 Personal study - Much Ado About Nothing

"Much Ado About Nothing", a compelling play by William Shakespeare, explores the changing relationships between the characters. Set in Messina during the late 1500s, Prince Don Pedro of Aragon and his men have returned from battle to Governor Leonato's country house. Through conflict, theme and characterisation, Shakespeare reveals a developing relationship between the cynical heroine Beatrice and the egotistical soldier Benedick. At the beginning of the play, there seems to be a possibility of a budding romance between Beatrice and Benedick although they appear to be in conflict with each other. Through dialogue we can assume that they are averse lovers. In the opening act we witness them arguing as lovers; " What, my dear Lady Disdain! Are you yet living?" - Benedick "Courtesy itself must convert to disdain if you come in her presence." - Beatrice (Act1.1.p25) Evidently, this is quite a tongue-in-cheek question with clear signs of attraction as he teases her. Their words, which may imply mutual abhorrence, are easier for them to express than to admit their true feelings. ...read more.

This statement is fairly indistinct but what's for definite is that Benedick has, in the past, broken her heart. "with false dice" suggests that he had misled or deceived her. This is the point in the play that we witness existent vulnerability within Beatrice and recognize where her cynical and hardened attitude to love stems from. Beatrice is reluctant to break free from her liberty and submit to a controlling husband. However, when she hears her kinswomen speaking of Benedick's love for her and what people say about her, she instantaneously opens herself up to love "Contempt farewell! And maiden pride adieu! No glory lives behind the back of such." (Act 3.1.109-10) Although she may appear tough and unsentimental, Beatrice is very vulnerable. She realises that her stubbornness and cynical outlook on love has prevented her from finding happiness and so she pledges her love for him "No glory...such" reveals that she recognizes that pride is her weakness and that people don't speak well of her behind her back because of it. ...read more.

With his love on trial, Benedick has no choice but to challenge Claudio - formerly his best friend. He has quite uncharacteristically handed over his loyalties to Beatrice. The Final Act sees a warm and blissful ending for Beatrice and Benedick as they publicly declare their love for each other. Benedick, who for so long had mocked love and marriage, asks for Beatrice's hand; "..never flout at me for what I have said against it - for man is a giddy thing and this is my conclusion." (Act 5. 4.105-6) Benedick finally realises how foolish he's acted and how much he's changed. "Much Ado About Nothing", a play by William Shakespeare effectively reveals a transforming relationship between Beatrice and Benedick through conflict, theme and characterisation. Throughout the play their relationship gives the audience a real sense of the unruly impulsiveness within love in addition to the struggles and conflicts they had to overcome. The transformation of two bitter and resentful spinsters into romantic lovers makes Shakespeare's "Much Ado About Nothing" a greatly amusing and classic play. ...read more.