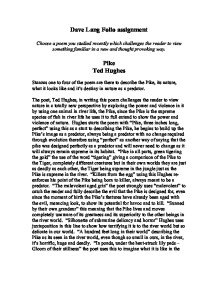 Dave Lang Folio assignment Choose a poem you studied recently which challenges the reader to view something familiar in a new and thought provoking way. Pike Ted Hughes Stanzas one to four of the poem are there to describe the Pike, its nature, what it looks like and it's destiny in nature as a predator. The poet, Ted Hughes, in writing this poem challenges the reader to view nature in a totally new perspective by exploring the power and violence in it by using one animal in river life, the Pike, since the Pike is the supreme species of fish in river life he uses it to full extend to show the power and violence of nature. Hughes starts the poem with "Pike, three inches long, perfect" using this as a start to describing the Pike, he begins to build up the Pike's image as a predator, always being a predator with no change required through evolution therefore using "perfect" as another way of saying that the pike was designed perfectly as a predator and will never need to change as it will always remain supreme in its habitat. "Pike in all parts, green tigering the gold" the use of the word "tigering" giving a comparison of the Pike to the ...read more.

"A life subdued to it's instrument" This meaning that its life is over-run by it's instinct to kill, it's role as a predator. As the poem appears to be separated into 3 sections, we move to the second section which seems to be about the poet's personal anecdotes. Starting with describing where he came across them and the habitat they were kept in. "Three we kept behind glass, jungled in weed: three inches, four and four and a half: we fed fry to them-" talking about how they were fed and then continuing to point out their violence and their evil "suddenly there were two. Finally one" suggesting that they are so evil that they will kill and consume each other like cannibals. "And indeed they spare nobody" this bringing the point that they live to kill or be killed. "Two, six pounds each, over two feet long, high and dry in the willow herb - One jammed past it's gills down the other's gullet" The poet describes when he seen this for himself, describe the violence, the sheer hatred for the other, so evil that the pike will completely disregard its own life to make sure the other dies, such force the two pike had when they collided that one ended up "jammed" down the others throat, killing both of them. ...read more.

him to disturb it, but casting his line anyway "but silently cast and fished" so scared that the splashes he creates with his rod might disturb this thousand year old evil and will notice him "with the hair frozen on my head for what might move, for what eye might move, the still splashes on he dark pond". Assuming that the poet was on a small boat "owls hushing the floating woods" he hears the owls in the woods that seems to float as he sits on this boat, "frail on my ear against the dream" just managing to hear the owls as the only noise - almost as if the owls "hushing" the rest of the woods to be silent, adding more fear to this trip - just keeping him aware of this world that seems so much like a dream. "Darkness beneath night's darkness had freed" this meaning the darkness of the water beneath the night's darkness and also the darkness of the Pike, as darkness is associated with evil, now moving "freed" under him, "that rose slowly towards me, watching." The pike, the evil slowly rising towards him watching his every move, he makes it as if the pike seeing him as prey, slowly approaching him, ready to strike. ...read more.