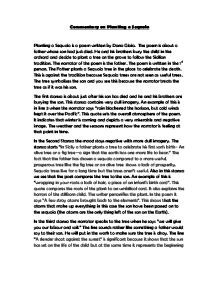 Commentary on Planting a Sequoia Planting a Sequoia is a poem written by Dana Gioia. The poem is about a father whose son had just died. He and his brothers bury the child in the orchard and decide to plant a tree on the grave to follow the Sicilian tradition. The narrator of the poem is the father. The poem is written in the 1st person. The Father plants a Sequoia tree in the place to celebrate the death. This is against the tradition because Sequoia trees are not seen as useful trees. The tree symbolizes the son and you see this because the narrator treats the tree as if it was his son. ...read more.

The fact that the father has chosen a sequoia compared to a more useful, prosperous tree like the fig tree or an olive tree shows a lack of prosperity. Sequoia trees live for a long time but the trees aren't useful. Also in this stanza we see that the poet compares the tree to the son. An example of this is "wrapping in your roots a lock of hair, a piece of an infant's birth cord". This quote compares the roots of the plant to an umbilical cord. It also explains the horrors of the stillborn child. The writer personifies the plant. In the poem it says "A few stray atoms brought back to the elements". ...read more.

The final stanza is about the family of trees the narrator plans to grow, to give the sequoia brothers and sisters just like he wanted for his son. A quote to show this is "And when our family is no more, all of his unborn brothers dead." This shows that the father wants another family. When he says "all of his unborn brothers dead" he uses an oxymoron to describe what it was like when he lost his son. The last line of the poem- "silently keeping the secret of your birth" is very optimistic. The narrator is looking towards the future in order to overcome the grief he had suffered. In conclusion, the poem shows one mans story of losing his son at a very young age and tries to replace his son with a tree and to treat the tree as his son. ...read more.

There are some very apt points made in this response but as a whole essay it is underdeveloped and does not explore the text in enough detail. The writer should consider the structure and form and how it is used to shape meaning. There should be further language analysis.