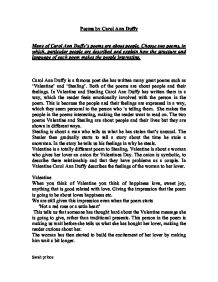 Poems by Carol Ann Duffy Many of Carol Ann Duffy's poems are about people. Choose two poems, in which, particular people are described and explain how the structure and language of each poem makes the people interesting. Carol Ann Duffy is a famous poet she has written many great poems such as 'Valentine' and 'Stealing'. Both of the poems are about people and their feelings. In Valentine and Stealing Carol Ann Duffy has written them in a way, which the reader feels emotionally involved with the person in the poem. This is because the people and their feelings are expressed in a way, which they seem personal to the person who 's telling them. She makes the people in the poems interesting, making the reader want to read on. The two poems Valentine and Stealing are about people and their lives but they are shown in different ways. Stealing is about a man who tells us what he has stolen that's unusual. The Stealer then gradually starts to tell a story about the time he stole a snowman. In the story he tells us his feelings in why he steals. Valentine is a totally different poem to Stealing. Valentine is about a woman who gives her lover an onion for Valentines Day. The onion is symbolic, to describe there relationship and that they have problems as a couple. In Valentine Carol Ann Duffy describes the feelings of the woman to her lover. ...read more.

Cling to your knife means that if you broke up the marriage or some how [you as in lover] wrecked it you will live it over knowing that he 'stabbed' her heart causing her deep pain and upset. Carol Ann Duffy has written the poem in direct speech. It's as if we're hearing someone speaking in a conversation but only hearing one side of it. The poem has not been written in regular verses. The irregular verses shows and adds to, how unconventional the relationship is between the lovers. In the poem there are three words on lines of their own. 'Here' on line 6, 'Take it!' on line18 and 'Lethal' on line 71. I think that these words were put on their own to give emphasis to their importance and add force in making their message clear. The words 'Take it' and 'Lethal' sums up the poem. 'Here I brought you an onion', 'Take it', She gives the onion to her lover, and 'Lethal' indicates that that the relationship is dead, over. Also when the poem started it starts off with a negative feeling, following a loving title. In Valentine all the way through the person speaking is in control of the whole situation and is telling her feelings and that her lover can take note of them because there not going to go, unless he takes to heart how she feels. Now the second poem Stealing. Stealing might be very different to valentine but the people in it are just as interesting. ...read more.

It appears to us that the stealer only steals because he gets bored very bored. When the stealers bored he steals, sometimes things he doesn't want, but he could sell them and get some money. The poem ends with the stealer asking his own question instead of answering them. "You don't understand a word I'm saying, do you?" The stealer is trying to get across to the reader that we don't understand why he steals and we will never know, because we will never be able to see it from his point of view. This question at the end is meant to make them think about the poem after they have read the poem. If the read does carry on thinking about the poem afterwards it means the reader, has been affected by the stealer, making the reader interested in him. In the poem valentine the relation ship between to lovers interests the reader, by a lady on Valentines Day gives her lover an unusual present. In valentine the is only one person speaking but the reader becomes interested in two individuals trying to sort there love lives out. In the poem stealing a stealer speaks why he steals. We learn that it gives him a buzz in side. Through the poem the stealer expresses his emotions and why he steals, finding out that he's not happy and leads a very lonely life. The stealer tells some stories about him stealing making him very interesting to read about. Sarah prince ...read more.