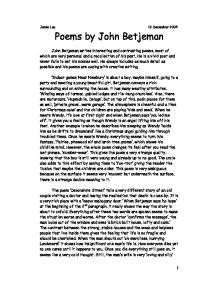 Jamie Lau 13 December 2004 Poems by John Betjeman John Betjeman writes interesting and contrasting poems, most of which are very personal and a recollection of his past. He is a vivid poet and never fails to set his scenes well. He always includes as much detail as possible and his poems are oozing with creative writing. 'Indoor games Near Newbury' is about a boy, maybe himself, going to a party and meeting a young beautiful girl. Betjeman conveys a rich surrounding and on entering the house, it has many wealthy attributes, 'Winding ways of tarmac, gabled lodges and tile-hung churches'. Also, there are motorcars, 'Hupmobile, Delage', but on top of this, posh places for them as well, 'private gravel, warm garage'. The atmosphere is cheerful and a time for 'Christmas cake' and the children are playing 'hide and seek'. When he meets Wendy, it's love at first sight and when Betjeman says 'you led me off', it gives you a feeling as though Wendy is an angel lifting him off his feet. Another example is when he describes him sleeping as Wendy 'holds him as he drifts to dreamland' like a Christmas angel guiding him through troubled times. ...read more.

Still, the man's wife is very 'loving and silly' and maybe actually the man is much better off, his wife has to watch him die and live the rest of her life as a widow mourning over her dead husband. Near the end of the poem he says, 'it's cheaper to take the tube', which shows how ordinary these people are and even they have great dramas in their lives. The poems 'Indoor Games Near Newbury' and 'Devonshire Street' have a lot in common as well as many differences. The mood of 'Indoor Games near Newbury' is happy 'Christmas cake' while 'Devonshire Street' is melancholy, 'sympathetic'. One talks about life, 'holding hands,' the other about death, 'X-ray photographs'. Though within the story of the poems, they both have dilemmas, 'Indoor Games near Newbury' is the problem of love; 'love so pure it had to end' and 'Devonshire Street' is facing an illness that is terminal, 'confirm the message.' Both of the poems start positive and end negative. 'Devonshire Street', there is still hope at the start when Betjeman describes 'the sun still shines' but none by the end, 'no hope.' ...read more.

Also it is upbeat at times and slower at others, maybe this is like a child talking or the way they behave, sometimes nice and fluent other times unpleasant and slow. I like the way the rhyme scheme is difficult to follow because it makes you think more and is a lot like the story itself, complicated and confusing. 'Devonshire street' has a simple A, B, A, B, C, D, C... but this is very appropriate and effective as the people in the poem are very ordinary and simple just like the rhyme scheme. All of this shows how clever and will thought out Betjeman's poems are. John Betjeman is a very complicated character himself and this reflects in his poems. He is a troubled man with many strong but deluded views. Both my chosen poems talk about people with many troubles, which might show that he uses his own life experiences to guide his poems. His poems might also be a way of expressing himself. Betjeman never fails to capture the reader's attention and all of his poems seem to have a small personal place in everyone's heart. I think that if there were one sentence to describe Betjeman, it would be "All good has a bad, everything is counter balanced." Jamie Lau 1 ...read more.