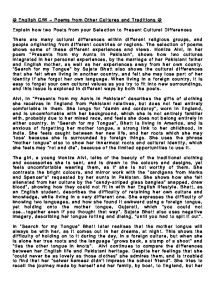 :) English C/W - Poems from Other Cultures and Traditions :) Explain how two Poets from your Selection to Present Cultural Differences There are many cultural differences within different religious groups, and people originating from different countries or regions. The selection of poems shows some of these different experiences and views. Moniza Alvi, in her poem "Presents from my Aunts in Pakistan", shows how two cultures integrated in her personal experiences, by the marriage of her Pakistani father and English mother, as well as her experiences away from her own county. "Search for my Tongue" by Sujata Bhatt also shows the cultural differences that she felt when living in another country, and felt she may lose part of her identity if she forgot her own language. When living in a foreign country, it is easy to forget your own cultural values as you try to fit into new surroundings, and this issue is explored in different ways by both the poets. ...read more.

The girl, a young Moniza Alvi, talks of the beauty of the traditional clothing and accessories she is sent, and is drawn to the colours and designs, yet feels uncomfortable wearing them, as if she is not worthy of them. She contrasts the bright colours, and mirror work with the "cardigans from Marks and Spencer's" requested by her aunts in Pakistan. She shows how she felt alienated from her culture by the "candy-striped glass bangles" snapped, drew blood", showing how they could not fit in with her English lifestyle. Bhatt, as an English student, describes the difficulty of retaining her own culture and knowledge, while living in a very different one. She expresses the difficulty of knowing two languages, and how she found it awkward using a foreign tongue, yet holding onto the mother tongue, Gujarati, which "you could not use...together even if you thought that way". ...read more.

Towards the end of Bhatt's poem more striking imagery is used to show that despite having "two tongues in your mouth", or speaking two languages, the innermost one will emerge, just when she felt she had lost it, "it blossoms out of my mouth". Despite the cultural differences and problems of two languages, Bhatt feels that the true ethnicity emerges. "Presents from my Aunts in Pakistan" end in a less positive note, as Moniza Alvi even feels like an outsider in Pakistan as she imagines herself "no fixed nationality, staring through fretwork at the Shalimar Gardens". She believes she cannot belong entirely to either culture, and the differences were particular apparent at this time in her life, when she was trying to find her identity and background, feeling isolated from other family members and disconnected to both the English and Pakistani ways of life. ...read more.