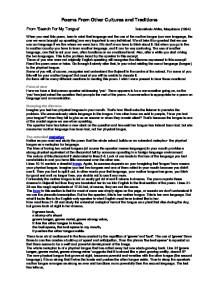 Poems From Other Cultures and Traditions - From 'Search For My Tongue' Tatamkhulu Afrika, Maqabane.

Poems From Other Cultures and Traditions From 'Search For My Tongue' Tatamkhulu Afrika, Maqabane (1994) When you read this poem, bear in mind that language and the use of the mother tongue (our own language, the one we were brought up speaking) are very important to any individual. We all take it for granted that we can use our language if we live where we were born. We don't even have to think about it. But when you go to live in another country you have to learn another language, and it can be very confusing. The use of another language, one that is not your own, often functions on an emotional level. Also, after a while you start mixing the two languages. This is the problem faced by the speaker in this excerpt. Those of you who were not originally English speaking will recognise the dilemma expressed in this excerpt! Read the poem once or twice. Go through it slowly after that, in your mind relating the use of language (tongue) to the physical tongue. Some of you will, of course, recognise and understand the Gujerati in the centre of the extract. For some of you this will be your mother tongue! But most of you will be unable to decode it. So there will be many different reactions to reading this poem. I wish I were present to hear these reactions! Point of view Here we have a first-person speaker addressing 'you'. There appears to be a conversation going on, as the 'you' has just asked the question that prompts the rest of the poem. A conversation is appropriate for a poem on language and communication. Grasping the dilemma Imagine you had two physical tongues in your mouth. That's how Bhatt asks the listener to perceive the problem. We unconsciously relate language to the tongue. How often have we said to people, 'Have you lost your tongue?' ...read more.

This is really a projection of his own hurt as he handles the wood. You will notice that the wood assumes a life of its own as he works. It 'swelled and shivered, breathing air'. The wood seems to move under his hands. We should compare this effect with that of the steel-tube furniture that is more popular, to see that the latter is lifeless. What are the 'rings of time'? They are the rings that you will see if you saw a piece of wood straight through the trunk so that the inside is visible. The number of rings tells the expert how old the wood is. Retreat into the forest The last section of the poem holds the suggestion of a primitive forest such as we would find in West Africa. What would the point of this be? Surely it is that the wood becomes for the man the embodiment of that place where anger resided, the ancient forest where Ogun could be found. Read lines 34-39 and think about the imagery here. Is it pleasant or beautiful? No, it has a sad and angry effect. First the woodworker hears the 'creak of forests', which with its sound introduces the picture of the forest. The creaks would represent the sounds of the very old trees there. The point is that the uncle, through the wood, 'recalls' or experiences a primitive, ancient forest, where forces that do not seem to exist in the modern world come into play. We are near the very source of his anger. Strange faces The forest is peopled by strange faces which create the images of the man's anger. * 'green lizard faces gulped'. With this reference the poet takes us far away from the contemporary world suggested by the steel furniture. * 'grey memories with moth eyes' are vague shapes that do not seem to belong to anything identifiable. ...read more.

Do not just identify the relevant concept. * Look at the language used in the following poems: "Search for my Tongue", "Unrelated Incidents" and "Half-Caste". Look carefully at the incorporation of dialects or in the case of "Search..." the incorporation of a different language to make a point. Look at the use of the Scottish dialect in "Unrelated Incidents" and be able to comment on what the poet's attitude is towards the use of Standard English for presenters. What is the poet's attitude in "Half-Caste"? Who is he scornful towards? How is he able to put his point across so successfully? Does the use of dialect or a different language enhance the meaning of the poem and the poet's message? * In "Blessing" the poet deals with the image of water and what it means to a community. Look at the religious metaphor in "Blessing" and compare it to the metaphor of the hurricane in "Hurricane" and what it means to the poet. In this way you will be looking at the use of language in the two poems. * "Charlotte O'Neil's Song" is a song in which the poet tells us of Charlotte's fight for her freedom. She writes with a particular rhyme scheme which enhances the idea of a "song". The rhythm in this poem is also regular and contributes to the song-like structure of the poem. The structure of this poem could be compared to the structure in "Ogun" in which the poet writes in definite couplets. Also look at the posibility that "Charlotte..." is quite a simple poem with no elaborate images, compared to "Ogun" which has more complex images. The simplicity of "Charlotte..." could also be compared to any of the other poems which use more elaborate imagery and figurative language. For instance, in "An Old Woman", the poem seems to start off simple and then becomes more detailed in terms of its imagery. You could explore this aspect and contrast it with any of the other poems. ...read more.