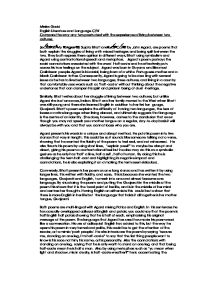 Poems From Other Cultures- John Agard and Sujata Bhatt

Mieke Gadd English Literature and Language C/W Compare the way any two poets deal with the experience of living between two cultures. Search for My Tongue by Sujata Bhatt and Half-Caste by John Agard, are poems that both explain the struggles of living with mixed heritages and being split between the two. They both express there opinion in different ways, Bhatt using symbolism and Agard using confrontational speech and metaphors. Agard's poem portrays the racist connotations associated with the word Half-caste and he effectively puts across his true feelings on the subject. Agard was born in Guyana and like most Caribbean people Agard is bi-racial, being born of a white Portuguese mother and a black Caribbean father. Consequently, Agard is going to be dealing with several issues as he has to live between two languages, three cultures, and living in a country that comfortably uses words such as 'half-caste' without thinking about the negative undertones that can dampen his spirit and pride in being of duel-heritage. Similarly, Bhatt writes about her struggle of living between two cultures, but unlike Agard she is of one race, Indian. Bhatt and her family moved to the West when Bhatt was still young and there she learned English in addition to her first language, Guajarati. Bhatt's poem explains the difficulty of having two languages, the fear of looses a native language when living abroad, and ultimately suggests that language is the centre of an identity. ...read more.

This fully drills the argument with full impact constantly asking the reader to change their attitude towards the term 'half-caste'. Bhatt has a very blatant language variation in her poem as she has written in Guajarati and English two extremely different languages. This use of Guajarati shows that her life is mixture of both and that her Guajarati will near be lost and will always be in her thoughts and life. Also in this poem Bhatt uses the word 'I' allot, "you ask me what I mean by saying I have lost my tongue," by doing this Bhatt is constantly referring to herself making it much more likely for other multi ethnic people to relate to the poem. What's more Bhatt uses some very powerful lines for instance, "if you had two tongues in your mouth, and you lost the first one, the mother tongue, and could not really know the other, the foreign tongue". In these lines Bhatt talks about their tongues being in conflict, never really fully mixing or complementing each other, but she also talks about how without each other they wouldn't work. Furthermore Bhatt writes about how you will never lose the mother tongue, "...but overnight when I dream, it grows back...the bud opens...it blossoms out of my mouth", this says and shows that the reinforcement of the mother tongue is unstoppable and by using the metaphor of a flower, it makes it beautiful. ...read more.

Her poem flows of the tongue and is read very gently. This could almost be to emphasise the idea that sleep, a calm concept, unlocking the mother tongue, or is to make sure that the idea of anger isn't brought across but it is more the idea of confusion and the idea of being lost without the mother tongue. I think that Agard is almost vulgarly blatant with his message that the term half-caste shouldn't be used and demines people that are mixed race. He argues the idea that when two opposite are mixed it creates something better, new and exciting. For example he writes "yu mean when Picasso mix red an green is a half-caste canvas?" he is almost using reverse psychology as Picasso by mixing red and green created an amazing canvas. He is using this poem to make it clear to people how offending this term can be and that it can truly rip a man's pride in half. Bhatt however, is conveying almost an opposite message. She is saying that no matter what you do, say, or for that matter what other people say, you can never lose who you are or where you came from or put in other words you can never lose your past. All in all I feel that the poems both convey the message that they set out to and did it with real passion but with two completely different massaged and two completely different styles, it really shows two completely different attitudes to dealing with a multi racial life. ...read more.