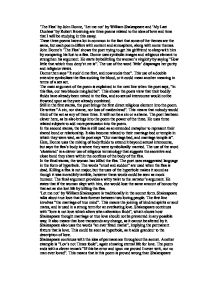 'The Flea' by John Donne, 'Let me not' by William Shakespeare and 'My Last Duchess' by Robert Browning are three poems related to the idea of love and time that I will be studying in this essay. These three poems have a lot in common in the fact that some of the themes are the same, but each poem differs with content and atmosphere, along with some themes. John Donne's 'The Flea' shows the poet trying to get his girlfriend to sleep with him by comparing his lust to a flea. Donne uses symbolic images and religious element to strengthen his argument. He starts by belittling the woman's virginity by saying "How little that which thou deny'st me is". The use of the word 'little' disparages her purity and religious views. Donne then says "It suck'd me first, and now sucks thee". This use of a double entendre symbolises the flea sucking the blood, or it could mean another meaning in terms of a sex act. The main argument of the poem is explained in the next line when the poet says, "in this flea, our two bloods mingled be". This shows the poets view that their bodily fluids have already been mixed in the flea, and so sexual intercourse would not be frowned upon as they are already combined. ...read more.

This means the joining of kindred spirits or soul mates, and is used in a strong term for an everlasting love. Shakespeare continues with "love is not love which alters when alteration finds", which shows how Shakespeare thought marriage or true love should not be prevented in any possible way. It also means that love transcends any change, as it cannot be altered by it. Shakespeare also uses the words "an ever fixed marke", implying the permanent fixture that is love. This could be seen as hyperbole, as it adds grandeur to the description of love. Shakespeare continues with the idea of permanence throughout the sonnet. Another example is "Lov's not Times foole", again showing eternal life for love. The poem ends with a clever remark "If this be error and upon me proved I never writ, nor no man ever loved". This means that is this poem is proved wrong than Shakespeare never wrote the poem and no man has ever loved. This shows the confidence of Shakespeare in what he feels, as he definitely wrote the poem, so it must be true, according to the last two lines. 'My Last Duchess' by Robert Browning is about the Duke talking about a portrait of his last Duchess. ...read more.

"The flea" has a very calm, yet rushed and seductive mood, which the poet uses to his advantage. "Let me not, however, it a more serious and traditional rendition of love, and "My Last Duchess" shows a more darker side of thing people do in marriage. These poems differ a lot in terms of the atmosphere. The language of the poems varies with each one. John Donne uses a lot of rhetoric skill and persuasion in his poem, using the rule of the three as well. There are also religious elements added in and slight hints at hyperbole. There is a strong rhyme scheme that goes like AABBCCDDD. Shakespeare's "Let me not" involves a great deal of hyperbole. He uses a lot of exaggerated language to show what love really is. He also uses a few idea of personification of love and time. The rhyme scheme in this poem follows the pattern that every other line rhymes. The pattern is ABABCDCDEFEFGG Browning's poem uses a strong rhyming scheme where every line rhymes with the next in a continuous AABBCCDD pattern. In conclusion, these three poems are similar less then they differ. There are definitely more difference including a lot of themes, although he idea of time is consistent throughout. The atmosphere and language are mostly different as wel.. ...read more.