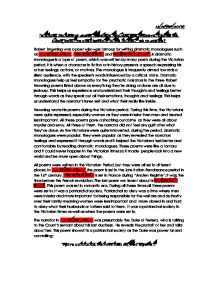 Mandy Pan W10 "Dramatic Monologue usually presents a psychotic killer. However, despite the shock factor, we often feel sorry for the narrator." Do you agree? Robert Browning was a poet who was famous for writing dramatic monologues such as "My Last Duchess", "The Laboratory" and "Porphyria's Lover". A dramatic monologue is a type of poem, which was written by many poets during the Victorian period. It is when a character in fiction or in history presents a speech expressing his or her feelings, actions, or motives. The monologue is frequently aimed towards a silent audience, with the speaker's words influenced by a critical state. Dramatic monologues help us feel sympathy for the psychotic narrators in the three Robert Browning poems listed above as everything they're doing or done are all due to jealousy. This helps us experience and understand their thoughts and feelings better through words as they speak out all their emotions, thoughts and feelings. This helps us understand the narrator's inner-self and what their really like inside. Browning wrote his poems during the Victorian period. During this time, the Victorians were quite repressed, especially women as they were inferior then men and treated less important. All these poems gave a shocking outcome as they were all about murder and envy. ...read more.

In these 3 poems, it delivers a sense of madness and psychotic in these narrators. We can tell this by the way they all speak. All 3 poems use repetition which illustrates that the narrators are all obsessive as they repeat what they said and make it clear to the reader that it's theirs. It also shows that they are very possessive and desperate to gain what they want. In "My Last Duchess", the narrator is pompous and superior. He is very determined and authoritative. This is shown when he says: "I gave commands; then all smiles stopped together" I have used this quote again as it has more to it. This quote also shows euphemism as it's hiding the true meaning so the reader can try to decipher it. The real meaning is that the duke gave orders to have the duchess killed. He also uses symbols to hide other meanings: "The bough of cherries some officious fool" This quote possibly represents her virginity. He gives out a hint that she may be promiscuous and this shows that he is jealous. "The white mule" This quote symbolizes her purity and virginity. In this poem it also includes enjambment, which shows that he is excited about revealing his painting. In "The Laboratory", it shows that the narrator is vengeful and impatient. ...read more.

It makes the reader feel sick and left inquisitive. Whereas in "The Laboratory", it starts off straight away with an eager and excited atmosphere and stays like that throughout the poem, delivering the fact that she is impatient and also angry at the same time. In conclusion, all 3 poems are all to do with jealousy and envy. They all commit a crime and have no regrets. Browning used dramatic monologues to explore these three characters because it was talking from a killer's perspective and it helps us understand better as it was in the first person. It was very powerful, especially the way when there was a sudden change in the atmosphere, which was very dramatic. It doesn't make us like them but it makes us feel sorry for them since they are all jealous. We all feel that all the time and we want to do something about it, but the way these narrators solve was just psychotic. All 3 narrators are jealous of love, jealous of their lovers being with another person and it makes us feel sorry for them because they are isolated or doesn't want to be isolated. I quite like "The Laboratory", because it's coming from a women's point of view and this women is determined to get revenge and do something about it. It makes me more confident and should do something about something that I am angry about. ...read more.