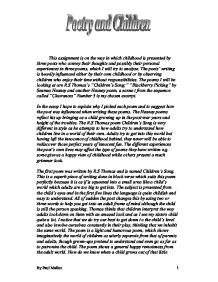 This assignment is on the way in which childhood is presented by three poets who convey their thoughts and possibly their personal experiences in three poems, which I will try to analyse. The poets' writing is heavily influenced either by their own childhood or by observing children who enjoy their time without responsibilities. The poems I will be looking at are R.S Thomas's "Children's Song;" "Blackberry Picking" by Seamus Heaney and another Heaney poem, a sonnet from the sequence called "Clearances" Number 3 is my chosen excerpt. In the essay I hope to explain why I picked each poem and to suggest how the poet was influenced when writing these poems. The Heaney poems reflect his up bringing as a child growing up in the post-war years and height of the troubles. The R.S Thomas poem Children's Song is very different in style as he attempts to how adults try to understand how children live in a world of their own. Adults try to get into this world but having left the innocence of childhood behind, they never will be able to rediscover those perfect years of innocent fun. The different experiences the poet's own lives may affect the type of poems they have written e.g. some give us a happy view of childhood while others present a much grimmer look. ...read more.

Heaney. It is dedicated to his mother, and the poem is written in the. The first eight lines recall Heaney's memories of him and his mother spending time together without anyone else around. Heaney is the oldest of nine in his family and his father had taken "all the others" away to Mass the poet and his mother are left to prepare the Sunday dinner. The child and his mother are peeling potatoes with out saying anything; it's as if they are telling each other every secret they have, in the silence, which probably spoke louder than words. It was as if they were in a different world and the only thing that brought them back to reality was the "Little pleasant splashes". Which the potatoes make as they fell into the clean water of the This was probably one of the only times he and his mother got to spend together without the other children and to Heaney this must have been one of the most special memories he had of his mother. This is the reason I think he remembered it when everyone else was in tears and praying at her deathbed. The sestet of the sonnet takes place at the time when he, recalled the memory that inspired the poem. ...read more.

The poem makes me think how lucky I am to have only ever had to console my best friend as his granddad had died, when I lose someone close to me, I could look back on this and may be then understand how hard it was for the poet to accept the loss of someone as precious as his mother obviously was to him. In conclusion, I chose the poems I did was because the R.S Thomas poem showed childhood in a light style that I think was very humorous. The reason I picked two poems by Seamus Heaney was that I wanted to show the difficult times and memories he has of childhood. As His early life may have been quite hard because he was born in the year that world war two broke out and his first twelve years were spent in the shadow of that war and the hardship which the conflict, the shortages and the rationing of goods that shortages caused brought to everyday life. Living in the country clearly gave the young child Heaney enjoyment hit there was also heartbreaking disappointment, as we see from the lose of the blackberries year after year I admire Heaney for all the things he has achieved in his life even after such hard times. By Paul Mallon 11A1 1 By Paul Mallon ...read more.