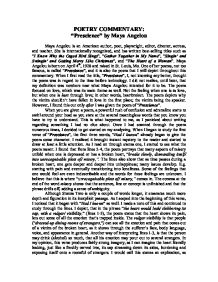 POETRY COMMENTARY: "Prescience" by Maya Angelou Maya Angelou is an American author, poet, playwright, editor, director, actress, and teacher. She is internationally recognized, and has written best-selling titles such as "I Know Why the Caged Bird Sings", "Gather Together in My Name", "Singin' and Swingin' and Getting Merry Like Christmas", and "The Heart of a Woman". Maya Angelou is born on April 4th, 1928 and raised in St. Louis, Mo. One of her poems, not too famous, is called "Prescience", and it is also the poem that I will depict throughout this commentary. When I first read the title, "Prescience", I, not knowing any better, thought the poem was in regard to the time before technology. I did not realize, until later, that my definition was nowhere near what Maya Angelou intended for it to be. The poem focused on love, which was its main theme as well. Not the feeling when one is in love, but when one is hurt through love; in other words, heartbroken. The poem depicts why the victim shouldn't have fallen in love in the first place; the victim being the speaker. However, I found this out only after I was given the poem of "Prescience". When you are given a poem, a powerful rush of confusion and adrenaline starts to swirl around your head as you stare at the several meaningless words that you know you have to try to understand. ...read more.

I found this a rather queer name for a poem that acknowledged of a broken heart. Then, I realized I was maybe just assuming of the meaning of prescience and did not know what it actually meant, which encouraged me to look it up in the dictionary. The dictionary definition of the term almost immediately eased me, "having foreknowledge or foresight"; this is certainly related to "Had I known", and now that I knew the reason for the stanza beginnings, I was satisfied. Reading on, I knew the clear meanings of the poem from lines 1-2., "solitude could/ stifle the breath, loosen the joint," and realized that they were fairly literal, not too metaphorical. The lines simply stated the weakness of a person who is lonely, and how that person cannot breathe (live) properly, and feels without animation; unable to move properly with confidence. In other words, how isolation can make someone feel so miserable. The rest of the verse, "and force the tongue against the palate", is a little deeper and more figurative. It portrays how loneliness (same origination) can result in forced speaking; incontrollable tongue-tying. This was what I thought before I searched for 'Palate' in the thesaurus. It was described as "taste" or "appreciation". This is when another hidden meaning unraveled in my mind. I suddenly thought of these lines as forced optimism, instead of forced speaking. ...read more.

A tiny detail that I noticed was that the stanza ended with a full stop instead of a comma, which points out that the poem has come to an end, and so have the thoughts. The overall effect of the poem is quite interesting. After I read the whole poem I felt a pang of sympathy for the heartbroken victim, as he had no idea what was coming to him. The first four stanzas portrayed the overall feeling of how one would feel if one was suffering form a broken heart. "Had I known" is the main pattern that relates to the title and theme, "Prescience". As I mentioned earlier on, Prescience means having foreknowledge or foresight. The phrase automatically related to the definition as the victim regrets all that happened, and if he had foresighted, if he had known, then none of this would have happened. Stanza Five gives an impression of confusion once again, and made me wonder whether there was any hidden meaning for this passage or not. Once I realized that there wasn't, I calmed down a little bit and read on. There is no tone for this passage as it doesn't give you any feeling. The last verse is my favorite. The effect that it gave me was mostly based on relief and I was given the vibe of bitterness that was depicted. All in all, the poem brought me feelings of sympathy and satisfaction. Not for me, but for the reader of this poem. ...read more.