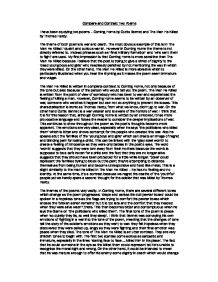 Compare and Contrast Two Poems I have been studying two poems - Coming Home by Curtis Bennet and The Man He Killed by Thomas Hardy. The theme of both poems is war and death. The most obvious example of this is in The Man He Killed: 'quaint and curious war is'. However in Coming Home the theme is not directly referred to. Instead phrases such as 'final military formation' and 'who sent them to fight' are used. My first impression is that Coming Home is more sensitive than The Man He Killed because I believe that the poet is trying to give a shred of dignity to the 'dead young boys and girls' who needlessly perished by not mentioning the way in which they were killed. On the other hand, The Man He Killed is more abrasive which is particularly illustrated when you hear the rhyming as it makes the poem seem immature and vulgar. The Man He Killed is written in complete contrast to Coming Home, not only because of the tone but also because of the person who would tell you the poem. The Man He Killed is written from the point of view of somebody who has been to war and experienced the feeling of killing a man. However, Coming Home seems to be written by an observer of war, someone who watches it happen but can not do anything to prevent the losses. ...read more.

Bennett capitalises on the fact that there always seems to be conflict in the world. 'Final military formation' and 'in rank and file' can both suggest hat the same thing - even in death, the war is ever present. I think that by using the word 'final' with 'formation' Bennet is trying to say that once they are involved in war there's no escape and it's as if the deaths of the soldiers wasn't enough to satisfy the hunger of war and so it is keeping them tied to it forever. Bennett also uses enjambment: 'whine and close tight ... Sealing the precious cargo inside.' By the use of this Bennet could be suggesting that, although there are gaps and brief interludes, it continues indefinitely. Hardy also uses this technique although it is not as effective because there are no other references to continuous war in the poem. Instead it contributes to the colloquial, narrative feel of The Man He Killed. All of these phrases can be pulled together to suggest that war is an endless reoccurrence which won't be stopped. It injects hopelessness into you as it means that people will continue to die. I think that it is the simplest phrases that have the most effect: 'once again' is incredibly simple but, in this context, incredibly effective as it implies that the plane has made this journey carrying home soldiers more than once. ...read more.

He may have done this because he was a soldier and is aware that they aren't particularly supposed to have those sorts of thoughts. This is shown by 'ranged as infantry' as he is impressing on us that he wasn't a person when he did it; he was a killing machine. The phrase 'off-hand like' implies that the act of going to war isn't thought over or deliberated about, he just went. I think that he could be suggesting that people at home believe war is so easy - you go, kill a few men, come back. However by reading the rest of the poem about his feeling suggest that it can leave you in moral turmoil. However the continuation of the rhymes suggests, I believe, that the poet is trying to make us aware of the underlying threat of the people who think that it's one big joke. In conclusion, I find that The Man He Killed is more touching than Coming Home because it's in first person and therefore I could sympathise more with his feelings. This is a complete turn around from my first impressions on the poems as The Man He Killed seemed childish to begin with but when you look deeper the true message is there. Despite the differences in the poems, both poets agree on their final message to the readers: war isn't glorious or heroic; it's a complete waste of life. ...read more.