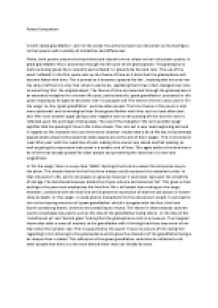 Poetry Comparison - In both great-grandfather, and on the verge the writers present an old person as the key figure.

Transfer-Encoding: chunked ﻿Poetry Comparison. In both ?great-grandfather?, and ?on the verge? the writers present an old person as the key figure to their poems with a variety of similarities and differences. Firstly, both poems present the key theme and idea of time to relate to their old person poetry. In great grandfather this is presented through the life cycle of the gramophone. The gramophone starts as being ?green lily is colourful and unfaded? to ?greenly lily like and rare.? The use of the word ?unfaded? in the first quote sets up the theme of time as it hints that the gramophone will become faded with time. This is proved as it becomes ?greenly lily like?, implying that not only has the colour left but it is only ?like? what it used to be, signifying that it has in fact changed over time to something ?like? the original object. ...read more.

The use of the metaphor ?life turns another page? signifies that the passing of time in life is like a book. This cuts out a very clear beginning and end in regards to life, however the use of the word ?another? implies that a lot of life has in fact already passed which presents the idea that older people are at the end of their ?pages?. This is mirrored in ?year after year? with the repetition of year making time sound very casual and fast passing, as well as giving the impression that a year is a smaller unit of time. This again adds to the idea that a lot of time has already passed for older people and presenting the idea that it is now very insignificant. ...read more.

The rhyme in these stanzas could be used to emphasize key points such as the idea of the grandfather being ?alone?, or the idea of the ?conditioned air? and ?behind glass? hinting that the gramophone rests in a museum. The irregular rhyme also adds a sense of mystery to the grandfather with it hinting that there was more to him than what the narrator saw. This is supported by the quote ?I have no picture of him doing this? regarding to him listening to the gramophone which gives the character of the grandfather being a lot deeper than is stated. This reflection of the great grandfather could also be reflected to all older people that there is a lot more behind them than can initially be seen. ...read more.