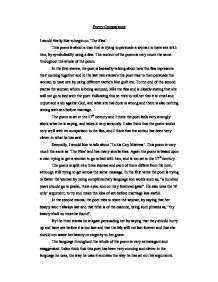 Poetry Comparison on 'The Flea', and 'To his Coy Mistress'.

Poetry Comparisons I would firstly like to begin on 'The Flea'. This poem is about a man that is trying to persuade a woman to have sex with him, by symbolically using a flea. The content of the poem is very much the same throughout the whole of the poem. In the first stanza, the poet is basically talking about how the flea represents their coming together and in the last two stanza's the poet tries to then persuade the woman to have sex by using different tactic's like guilt etc. To the end of the second stanza the woman whom is being seduced, kills the flea and is clearly stating that she will not go to bed with the poet. Following this he tries to tell her that it is cruel and unjust and a sin against God, and what she has done is wrong and there is also nothing wrong with sex before marriage. The poem is set in the 17th century and I think the poet feels very strongly about what he is saying, and takes it very seriously. ...read more.

By the third stanza he is again persuading her by saying that they should hurry up and have sex before it is too late and that the life will not last forever and that she should not waste her beauty or virginity to her grave. The language throughout the whole of the poem is very extravagant and exaggerated. I also think that this poet has been very cunning and clever in the language he uses, the way he uses it and also the way he has set out his arguments. Lastly, I would like to write about 'Rapunzstiltskin'. This poem is very much more modernised in terms of writing style and language, it is also set in modern day although it tries to represent the story as a parody of other poems. The poem, at first glance, appears very similar to 'To His Coy Mistress" and 'The Flea' in terms of its structure. It is a long poem, which is not broken up into stanzas and, unlike the other two poems, it tells a story. However, the similarities do not stop there because whilst the two pre-twentieth century poems are very traditional in terms of their language and structure. ...read more.

She decides however, to give him a chance even though she recognizes that her romantic hopes are 'corny'. We quickly get a sense of her anger as he proves to be less than adequate ' shimmying in & out every other day as though he owned the place'. He shows interest in only one thing and expects her to do all the work and 'weave the means of her own escape'. She is patient and encouraging at first, holding out hope that she might be able to guide him towards something at least a little closer to her idea of what a man should be like. However, he fails completely in this respect and she ends up speechless with frustration and tears herself in two. I think all in all when love is concerned in poetry nowadays it is a bit of a mockery and no one ever takes it that seriously. People think that love is something to be laughed at and never something to be admired. So I think love poems have changed a lot, although there are still some poets who have the right idea. ...read more.