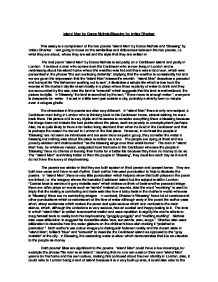 Island Man by Grace Nichols/Blessing by Imtiaz Dharker This essay is a comparison of the two poems 'Island Man' by Grace Nichols and 'Blessing' by Imtiaz Dharker. I am going to focus on the similarities and differences between the two poems, i.e. what they are about, where they are set and the style that they are written in. The first poem 'Island Man' by Grace Nichols is set partly on a Caribbean island and partly in London. It is about a man who comes from the Caribbean who is now living in London and is reminiscing about his island home where the weather was hot and there was a lot of sun, which was personified in the phrase "the sun surfacing defiantly", implying that the weather is consistently hot and we are given the impression that the 'Island Man' misses it's warmth. 'Island Man' describes a peaceful and tranquil life "the fishermen pushing out to sea", it illustrates a simple life which is free from the worries of the modern city life is set mostly in a place where there is plenty of water to drink and they are surrounded by the sea, also the land is "emerald" which suggests that the land is well-watered, the picture is idyllic. In 'Blessing' the land is scorched by the sun, "There never is enough water.", everyone is desperate for water. ...read more.

In contrast, Dharker's 'Blessing' has a lot of commas and other punctuations which is reminiscent of the flow of water although early in the poem the author uses short, sharp sentences which makes the poem feel quite serious which is in contrast to the main stanza, which, although the undertone is very serious, has an excited and happy feeling to it. The tone in which 'Island Man' is written is somewhat wistful and uses repetition to signify the man's efforts to drag himself back to reality from his daydreaming-"groggily groggily" and "muffling muffling". Nichols also uses alliteration to suggest his dreamlike state-"sea, sun,sands, soar, surge." Dharker also uses alliteration to describe how the water glistens on the children's bare skin making it "polished to perfection." Both author's use colour imagery to distinguish between reality and the dream state in 'Island Man', brilliant "blue" and "emerald" to describe the Caribbean island as opposed to the "grey metallic" of the city. In Blessing, the cascading water is silver which demonstrates that it is as valuable to the people as money Both poems' titles are significant to the poems. 'Island Man' could have a few meanings, for example the phrase "No man is an island." meaning that no one can exist on their own-'Island Man' yearns for his home and his own culture, making him confused about his own identity in London, also, it could refer to London being a sort of island because it is a very built ...read more.

water and lives in a flat or house of some kind whereas the people in 'Blessing' cannot even afford clothing for their children, they use "pots, brass, copper, aluminium, plastic buckets, frantic hands" just to collect what little water there is there. They have no way to escape that life and move to a country or city that is better off and has plenty of resources for living. They live in huts and are crowded together whereas the "island man" leads a solitary life on his own. The difference being that 'Island Man' is isolated in London and set apart from his own culture but the villagers in 'Blessing' are united because of their culture and lifestyle. I personally preferred reading Nichols' 'Island Man' because although both poems have equally vivid imagery and quite positive tones, Dharker's 'Blessing' has a very serious and worrying undertone in that the people are starving and they are dying of thirst while we waste what we have and think nothing of it at all. However, after reading the poem 'Island Man' you are not left with the uncomfortable feeling you have when reading 'Blessing', 'Island Man' gives a happier feeling because the man is daydreaming and his thoughts are all happy. In both poems there is a an escapist tone but we are always brought back to reality- 'Island Man' must always get up and go to work day after day and the burst water pipe will soon be fixed. ...read more.