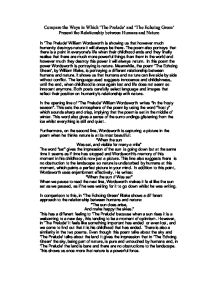 Compare the Ways in Which 'The Prelude' and 'The Echoing Green' Present the Relationship between Humans and Nature In 'The Prelude' William Wordsworth is showing us that however much humanity destroys nature it will always be there. The poem also portrays that there is a point in everyone's life when their childhood ends and they finally realise that there are much more powerful things than them in the world and however much they destroy this power it will always return. In this poem the power Wordsworth is portraying is nature. Meanwhile, the poem 'The Echoing Green', by William Blake, is portraying a different relationship between humans and nature. It shows us that humans and nature can live side by side without conflict. The language used suggests innocence and childishness, until the end, when childhood is once again lost and life does not seem so innocent anymore. Both poets carefully select language and images that reflect their position on humanity's relationship with nature. In the opening line of 'The Prelude' William Wordsworth writes "In the frosty season". This sets the atmosphere of the poem by using the word "frosty" which sounds sharp and crisp, implying that the poem is set in the middle of winter. ...read more.

On the third line of the first verse an object made by man welcomes nature: "The merry bells ring To welcome the spring" Even though the bells might be disturbing nature, it is a celebration welcoming the natural cycle of seasons. The rhyming used throughout this poem has a calming feel which gives the impression that nature and humans can live together in harmony. Throughout the poem of 'The Prelude' there is a connection between the boy and a horse. Wordsworth writes on the eighth line: "Proud and exulting like an un-tired horse" The word exulting has connotations towards a horse rearing up. Comparing the boy to the nature within a horse shows that the boy is free and in contact with nature around him, making him feel powerful against these forces. Wordsworth compared himself to a horse because horses are powerful and strong creatures, just like nature is powerful and strong, and when Wordsworth was around nature he also felt this way. In contrast to the boy's solitude, the villagers in 'The Echoing Green' revel in their togetherness. On the tenth line, Wordsworth compares the boy's movements on the ice with a snake which is a part of nature: "We hissed along the polished ice in games" Wordsworth uses onomatopoeia to show the sounds the boys are making as they skate across the ice. ...read more.

By using the word 'they' it could mean that 'they' is Wordsworth's past memories of being the boy are stretching out and as they are stretching out the details of the memories are being lost, just like his childhood is lost. At the very end, it becomes definite that the boy feels bewildered by the vastness of nature and this is when the main point of the poem is realised: "Feebler and feebler, and I stood and watched Till all was tranquil as a dreamless sleep." This shows that the boy is helpless and small as he is realising that no man on this planet can change nature because nature's powers are vast and strong. At the same time however, Wordsworth presents his urge to escape "the tumultuous throng" and be at one with "tranquil" nature. Both Wordsworth and Blake chose to use a time of day to create the mood of their poems. However, whilst Wordsworth and Blake use similar methods of presenting the relationship between humans and nature, the images they evoke are very different. Wordsworth's poem has melancholic undertones and a resentment of man's destruction of nature. Blake on the other hand, celebrates humans and nature living in harmony. ?? ?? ?? ?? ...read more.