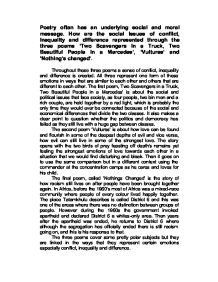 Poetry often has an underlying social and moral message. How are the social issues of conflict, inequality and difference represented through the three poems Two Scavengers in a Truck, Two Beautiful People In a Mercedes(TM),

Poetry often has an underlying social and moral message. How are the social issues of conflict, inequality and difference represented through the three poems 'Two Scavengers in a Truck, Two Beautiful People In a Mercedes', 'Vultures' and 'Nothing's changed'. Throughout these three poems a sense of conflict, inequality and difference is created. All three represent one form of these emotions in ways that are similar to each other and others that are different to each other. The first poem, Two Scavengers in a Truck, Two Beautiful People in a Mercedes' is about the social and political issues that face society, as four people, two bin men and a rich couple, are held together by a red light, which is probably the only time they would ever be connected because of the social and economical differences that divide the two classes. It also makes a clear point to question whether the politics and democracy has failed as they still live with a huge gap between classes. The second poem 'Vultures' is about how love can be found and flourish in some of the deepest depths of evil and vice versa, how evil can still live in some of the strongest love. The story opens with the two birds of prey feasting off death's remains yet feeling the strongest emotions of love towards each other in a situation that we would find disturbing and bleak. Then it goes on to use the same comparison but in a different context using the commander at the concentration camps as he cares and loves for his child. The final poem, called 'Nothings Changed' is the story of how racism still lives on after people have been brought together again. In Africa, before the 1960's most of Africa was a mixed-race community where people of every colour lived happily together. The place Tatamkhulu describes is called District 6 and this was one of the areas where there was no distinction between groups of people. ...read more.

there was still a racial divide between the two groups of people and in the poem one group is displayed with a higher class than the other. In this case it is the white people's side of District 6 is described as a lot more luxurious than the black people's side. This also shows the social issues of difference and inequality as there is a divide between the two types of people and how they live. An example of this is where it says in the 5th stanza "crushed ice white glass, linen falls, the single rose." This is the description of an up-market restaurant where white people are welcome. The description creates a very vivid image of a very typical posh restaurant with lots of glassware and linen covers over the table with a flower added to the top. However, when put in contrast with the description of what the black peoples natural dining place there is a clear picture of difference between the two. It starts on the stanza below with "down the road, working man's caf� sells bunny chows. Take it with you, eat it at a plastic table's top, wipe your fingers on your jeans, spit a little on the floor: it's in the bone." This creates an opposite image and feel compared to the first description. The image created from this description is of some cheap "working man's" fast-food diner as it says "eat it at a plastic table's top..." which when compared with the description of the first restaurant's tables which are covered in linen sheets we see that there is a real difference between the two. Another representation of the social issues facing us is in 'Two Scavengers...' In the poem the way the two types of people are described and imagined shows difference and inequality and it can even be looked at in a deeper context to, rather than the differences of the clothes they are wearing. ...read more.

This shows the difference between the two classes as they are too different to be related to each other. In conclusion the way that the social issues of conflict, inequality and difference are represented in the following poems, 'Two Scavengers in a Truck, Two beautiful People in a Mercedes', 'Vultures' and 'Nothings Changed' varies in the each of the different poems. They are all very opposite to each other and cover different subjects. The first poem is written about how bin-men and a rich couple will always lead different lives and rarely cross paths. Its purpose is to show the differences and inequality in society as some people will lead brighter lives to others because of the gaps between them. The second is of how a butcher of lives can come home and bring warmth and love back to his family as the commander of the death camps returns. Finally the last one is about how racism will continue to flourish even when it has officially ended. During theses varied ideas, the emotions of conflict, inequality and difference occur. The differences in the two pair's lives, as the rich couple go visit their architect to begin their day as the bin-men finish theirs after a long shift. This is shown through the way the poet describes the two classes of people. Conflict is portrayed through the way love and evil are connected as they are polar emotions, and how that someone that is evil will be conflicted with love and they can never escape that, and vice versa, how the most loving person will always have the ability to do evil locked deep inside them. Finally, an example of inequality being represented in the poems is through the differences between the two cultures as describe in District 6 of 'Nothings Changed'. The way that 'whites only inn' has linen cloth covering the tables with crystal glassware and roses on top whereas the 'working man's caf�' has the messy fast food where they eat off the plastic table tops with their hands and wipe it on their jeans. ...read more.