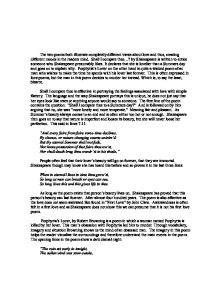 Porphyria&amp;#146;s Lover and a Sonnet

The two poems both illustrate completely different views about love and thus, creating different moods in the readers mind. Shall I compare thee...? by Shakespeare is written to entice someone who Shakespeare presumably likes. It declares that she is lovelier than a Summers day and goes on to explain why. Porphyria's Lover on the other hand is quite a wicked poem of an man who wishes to make the time he spends with his lover last forever. This is often expressed in love poems, but the man in this poem decides to murder her instead. Which is, to say the least, bizarre. Shall I compare thee is effective in portraying the feelings associated with love with simple flattery. The language and the way Shakespeare portrays this is unique, he does not just say that her eyes look like stars or anything anyone would say to someone. The first line of the poem contains the question. "Shall I compare thee to a Summers day?" And is followed on by him arguing that no, she was "more lovely and more temperate." Meaning fair and pleasant. As Summer's beauty always comes to an end and is often either too hot or not enough. Shakespeare then goes on to say that nature is imperfect and looses its beauty, but she will never loose her perfection. ...read more.

The next few lines: "When glided in Porphyria; straight She shut the cold out and the storm, And kneeled and made the cheerless grate Blaze up, and all the cottage warm." Give us the sense that this woman holds some power over her lover. She seems to take care of him. This sets up a reason why the speaker is obsessed with Porphyria. Dependence is a common feeling associated with love as many people find that they need them to fill holes inside of them. Porphyria is obviously of a higher rank in society by her use of the words "pride and vanity." This "rank" gives her obvious power. Porphyria's power is stopped when she tells him why she came: "Murmuring how she loved me-she Too weak, for all her heart's endeavour To set it's struggling passion free From pride, and vainer ties dissever, And give herself to me forever." This is Porphyria's weak attempt at breaking-up with the lover. By "murmuring" she loses her pride. You can even imagine that she had come to him from a party when the speaker, later in the poem, says: "tonight's gay feast." By breaking-up with him she could possibly enjoy her evening with another man. Lust, a feeling closely linked with love. ...read more.

He then projects his feelings on her. He says he is sure that she felt no pain when he knows that he was hurt and in turn he hurt her. The speaker's need for Porphyria in his life led him to kill her and to have him by her side forever. In a way, the speaker has chosen Porphyria's path in life; instead of being in high society she can stay with him. The speaker is now Porphyria's superior. ". . . Her head, which droops upon it still; The smiling rosy little head, So glad it has its utmost will, That all it scorned at once is fled, And I, its love, am gained instead!" In those lines, one can see that the speaker is truly obsessed. In his mind he saved her from her hated society and instead gained him, her love. The last line in the poem, "And yet God has not said a word!" Makes us feel his deeds were not wrong because God had not bothered to strike him dead by lightning making the speaker's obsession with his love legitimate and valid in the world. The largest feeling in this poem is obsession and all it's dreadful results. Murder. We also witness this kind of behaviour in the poem "My Last Duchess" In which a Lord talks about his dead Duchess and how he killed her because, basically, she smiled at other men. By James Regan 10E ...read more.