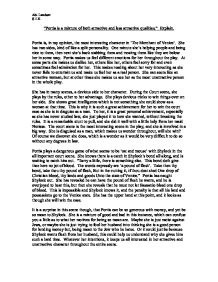 &quot;Portia is a mixture of both attractive and less attractive qualities.&quot; Explain.

"Portia is a mixture of both attractive and less attractive qualities." Explain. Portia is, in my opinion, the most interesting character in 'The Merchant of Venice'. She has two sides, kind of like a split personality. One minute she's helping people and being nice to them, then next she's back stabbing them and treating them like they are below her in some way. Portia makes us feel different emotions for her throughout the play. At some parts she makes us dislike her, others like her, others feel sorry for and even sometimes feel admiration for her. This makes reading about her very interesting as she never fails to entertain us and make us feel her as a real person. She can seem like an attractive woman, but at other times she makes us see her as the most unattractive person in the whole play. She has in many scenes, a devious side to her character. During the Court scene, she plays by the rules, other to her advantage. She plays devious tricks to win things over on her side. She shows great intelligence which is not something she could show as a woman at that time. This is why it is such a great achievement for her to win the court case as she is in disguise as a man. ...read more.

It is a test of love, but an unfair one. She doesn't seem to care that it is a very difficult decision, all she cares about is what Bassanio will do, or rather who he will choose. "I would lose all, ay, sacrifice them all Here to this devil, to deliver you." "Your wife would give you little thanks for that If she were by to hear you make the offer." Here Bassanio is talking to Portia, but he doesn't know it is she. He is saying he would sacrifice his wife for his friend Antonio, and Gratiano agrees with him. But what they don't know is that they are telling their wives, and we know they are. It is a cruel thing for Portia to stand there and act as if she agrees because Bassanio will never know the truth. We can also feel admiration for Portia though. She had the courage to become a lawyer for the trial, and she played it well. Not one other character suspected she was not sincere, which makes us feel as if she is somebody to be proud of, or to look up to. She is a clever woman, she had to pretend to be a man in front of a whole court room, and she managed to do it, and do it well. ...read more.

The play involves many plots, but I think what much of it comes down to, is racism. Portia lays a huge part in being racist, especially with her suitors. She sees the Prince of Morocco as being black, so she purposely hints for him to choose the wrong casket, without giving him a chance to show his true self. It is unfair of her to assume he is a bad person just from his colour, but she doesn't just do this to him. "A gentle riddance! Draw the curtains, go. Let all of his complexion choose me so." This is an unfair comment to make about his colour, especially just after he has chosen the wrong casket. She treats Jews the same. We can see this in the trial of Shylock, and if he wasn't a Jew, she may have treated him slightly better. Her character is the most interesting in the entire story I feel, she has many sides to her, and it makes every scene more interesting as we never know what she will do and how she will react to certain situations. She is a funny character sometimes too. Her collection of suitors amuses us, and amuses her too. She makes every act seem like a different character as she is so different all the time. I like the character of Portia, although sometimes she can be so cruel you can even hate her then like her again, as if by the switch of a button. Abi Lambert S11K ...read more.