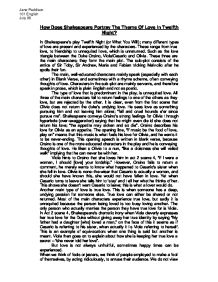 Portrayl of Love in Shakespeare's Twelf Night (What You Will)

How Does Shakespeare Portray The Theme Of Love In Twelfth Night? In Shakespeare's play Twelfth Night (or What You Will); many different types of love are present and experienced by the characters. These range from true love, to friendship to unrequited love, which is unreturned. Such as the love triangle between the Duke Orsino, Viola/Cesario and Olivia. These three are the main characters; they form the main plot. The sub-plot consists of the antics of Sir Toby, Sir Andrew, Maria and Fabian tricking Malvolio after he spoils their fun. The main, well-educated characters mainly speak (especially with each other) in Blank Verse, and sometimes with a rhyme scheme, often conveying thoughts of love. Characters in the sub-plot are mainly servants, and therefore speak in prose, which is plain English and not as poetic. The type of love that is predominant in the play, is unrequited love. All three of the main characters fail to return feelings to one of the others as they love, but are rejected by the other. It is clear, even from the first scene that Olivia does not return the duke's undying love. He sees love as something pursuing him and not leaving him alone; "fell and cruel hounds e'er since pursue me". ...read more.

This is an example of equivocation: when one thing is said but another is meant. Viola then goes on to explain about how she is keeping her true love a secret - "she never told her love". But love is not always unfruitful, sometimes happy times can be experienced. When we think of fools or jesters, we think of people employed to make a fool of themselves, by acting ridiculously, to amuse their audience. We do not view fools as methodical, deep thinking or to have views about anything. It would not be right to call Feste a 'fool', as he probably has the most down to earth view of love than any of the other characters. He entertains by playing music to make people feel better. He may have the best view of love because he is always observing, never taking part in love. Often the third party opinion is the most reliable. In his first love song Feste mentions 'roaming' suggesting that love is something that must be searched for. He then goes on to say "'tis not hereafter" and "present laughter." This implies that love is something that does not last forever, but while it's there, it's worth it! ...read more.

At the beginning of Act " Scene 3, Sir Andrew rather quickly convinces Sir Toby that life "consists of eating and drinking", thus a typical late night jolly time is started, joined later by Feste and Maria. Shakespeare shows that hedonistic lifestyles are present in Elizabethan England through the use of Sir Toby as an example. Sir Toby appears just to be out for and enjoy life and not take anything seriously, but he really does love Maria, referring to her as his 'metal of India' meaning gold which is priceless. And he cares about and respects Olivia - "drinking healths to my niece," but often combines these feeling with his hedonistic lifestyle. Shakespeare uses many tactics to convey the different kinds of love present in twelfth night. Most types are allocated to a certain character or group of characters, such as Self Love to Malvolio, but the main types; true love and unrequited love, are associated with the characters in the main plot. Shakespeare uses tactics such as hyperbole, which is mainly in the duke's case, describing love as all consuming and unescscapeable, when really Olivia is just not interested in him and he can't accept this. He also uses dramatic irony, ambiguity and equivocation to show hidden love, and love that is kept secret. He also uses the Verse and Blank verse when characters are referring to love. ...read more.