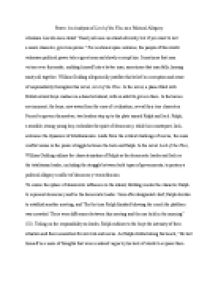 Power: An Analysis of Lord of the Flies as a Political Allegory

﻿Power: An Analysis of Lord of the Flies as a Political Allegory Abraham Lincoln once stated ?Nearly all men can stand adversity, but if you want to test a man's character, give him power.? For centuries upon centuries, the people of this world witnesses political power take a great man and slowly corrupt him. Sometimes that man victors over this snake, molding himself into a better man; sometimes that man falls, loosing sanity all together. William Golding allegorically justifies this belief on corruption and sense of responsibility throughout his novel, Lord of the Flies. In the novel, a plane filled with British school boys crashes on a deserted island, with no adult to govern them. In the barren environment, the boys, now away from the eyes of civilization, reveal their true characters. Forced to govern themselves, two leaders step up to the plate named Ralph and Jack. Ralph, a sensible, strong young boy, embodies the spirit of democracy, while his counterpart, Jack, embraces the dynamics of totalitarianism. ...read more.

They were bitten down to the quick though he could not remember when he had restarted this habit nor any time when he indulged it? (109). Ralph?s preoccupation with caring for the boys caused him to not care for himself. Everything that Ralph knows falls apart as ?the conch exploded into a thousand tiny white fragments [?]Viciously, with full intention, [Jack] hurled his spear at Ralph. The point tore the skin and flesh over Ralph?s ribs? (181). Once the one thing Ralph stood for and believed in falls, so does he. Jack takes advantage of his vulnerability and wounds him, proving that Ralph?s democratic reign dismembered. Ralph is vulnerable and weak without the protection of democracy, and the conch was the one thing that fully enforced democratic rule and what Jack did put up with. Golding utilizes the creation of Ralph to maintain democracy and reason present. Although there already is a democratic leader, Golding contrasts the character and role of Ralph by fabricating the totalitarian leader Jack. As Ralph lays down the rules of the assembly, Jack immediately jumps and says ??And he won?t be interrupted. ...read more.

The yelling ceased, and Samneric lay looking up in quiet terror. Roger advanced upon them as one wielding a nameless authority?(182). Adolf Hitler had the S.A. and S.S. to enforce his dictatorship among civilians. Joseph Stalin utilized the K.G.B., initiating fear throughout his sovereignty. Italy?s Benito Mussolini employed the black shirts to terrorize the civilians, creating a fear to go against him. On this particular island, the totalitarian Jack exploits the character of Roger to institute a fear, a terror, a ?country? scared of protesting against their leader. Golding crafts the character of Jack to expose the existence of totalitarian political allegory. William Golding creates a political allegory in Lord of the Flies through the characterizations of Ralph and Jack and their power conflict. Ralph?s perseverance, rationality, and purity allude to his connection to democracy. In contrast, Jack demonstrates impulsiveness, selfishness, and intensity to illustrate his inexorable link to totalitarianism. Through the political allusions inherent in Ralph and Jack, Golding proves that the power struggle between the purity of democracy and the evils of totalitarianism remains violent, unfortunate, and perpetual. Political struggles expose the natural spirit of man, and predictably transform his character into one of animalism and savagery. ...read more.