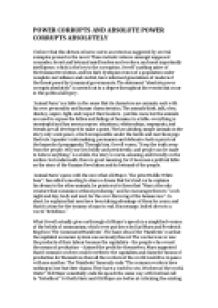 ﻿POWER CORRUPTS AND ABSOLUTE POWER CORRUPTS ABSOLUTELY I believe that this dictum is borne out to an extent as suggested by several examples present in the novel. These include violence amongst supposed comrades, deceit and betrayal amid leaders and workers, and most importantly intelligence, which is the key to the corruption. Orwell? scathing satire of the Russian Revolution, and his dark dystopian vision of a population under complete surveillance and control, have informed generations of readers of the threat posed by tyrannical governments. The statement ?absolute power corrupts absolutely? is carried out to a degree throughout the events that occur in this political allegory. ?Animal Farm? is a fable in the sense that its characters are animals, each with his own personality and human characteristics. The animals think, talk, obey, disobey, aspire, fight, and respect their leaders - just like men; but the animals are used to expose the follies and failings of humans. In a fable, everything is meaningful and has some purpose; situations, relationships, scapegoats, and friends are all developed to make a point. The law abiding, simple animals in the story only want peace, which is impossible under the harsh and merciless pigs that rule. Squealer's rationalising, persuasion and defensive tactics point out the hazards of propaganda. ...read more.

The pigs are reliant on the ignorance of the other animals, and their inability to see how the principles of Animalism are becoming corrupted. Many examples of the animals? exploitation are easily recognised in the book such as when the pigs steal all the fresh milk from the cows but the less intelligent animals don?t seem to notice. Also, Napoleon tends to scheme quite a lot and this particular one, is the tipping point of corruption on Animal Farm? During the time when all the animals were beginning to read and write, Napoleon took nine puppies from their mothers at birth and began to raise them himself. No one knew exactly what he was doing until the dogs suddenly appeared, fully grown, to chase Snowball off the farm. When the dogs returned to him, ?It was noticed that they wagged their tails to him in the same way as the other dogs had been used to do to Mr Jones?. Napoleon may not have had as many ideas as Snowball, such as the windmill, but he had got a taste for power, and he learns from the best. In this case, Mr Jones. After Snowball was chased off by Napoleon?s vicious dogs and turned into a scapegoat, it was easy to over-correct Napoleon?s propaganda and imagine Snowball a great and noble pig. ...read more.

And as the book is written from the animals? point of view, there is a lot of irony relating to the their pride: ?And yet the animals never gave up hope. More, they never lost, even for an instant, their sense of honour and privilege in being members of Animal Farm. They were still the only farm in the whole country ? in all England! ? owned and operated by animals. Not one of them ever ceased to marvel at that.? And while the pigs use pride to control the other animals, their own pride controls them in much the same way. To conclude, old cynical Benjamin was mostly accurate when he said that life would always go on badly, however, I believe that absolute power does not always absolutely corrupt. When Jones had control over the farm, he did not slaughter the animals, over?work them, or even ever betray them - even though he was irresponsible at times. I think that the animals, who had never acted like humans or practised human traditions, were taking advantage of their leadership and only intelligence corrupted them. Whereas the less clever animals did not understand the pigs? intentions, allowing the pigs to exploit them shamelessly. Therefore, the pigs turned out to be a worse version of Jones and having been animals once themselves, they knew every way in which they could exploit and deceive them further. ...read more.