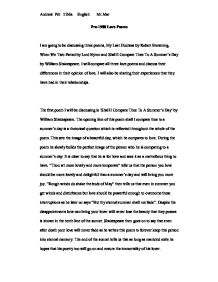 Pre-1900 Love Poems - I am going to be discussing three poems, My Last Duchess by Robert Browning, When We Two Parted by Lord Byron and Shall I Compare Thee To A Summer's Day by William Shakespeare.

Pre-1900 Love Poems I am going to be discussing three poems, My Last Duchess by Robert Browning, When We Two Parted by Lord Byron and Shall I Compare Thee To A Summer's Day by William Shakespeare. I will compare all three love poems and discuss their differences in their opinion of love. I will also be sharing their experiences that they have had in their relationships. The first poem I will be discussing is 'Shall I Compare Thee To A Summer's Day' by William Shakespeare. The opening line of this poem shall I compare thee to a summer's day is a rhetorical question which is reflected throughout the whole of the poem. This sets the image of a beautiful day, which he compares to love. During the poem he slowly builds the perfect image of the person who he is comparing to a summer's day. It is clear to say that he is for love and sees it as a marvellous thing to have. "Thou art more lovely and more temperate" tells us that the person you love should be more lovely and delightful than a summer's day and will bring you more joy. "Rough winds do shake the buds of May" then tells us that even in summer you get winds and disturbance but love should be powerful enough to overcome these interruptions as he later on says "But thy eternal summer shall not fade". ...read more.

" I choose never to stoop" tells us he has a lot of pride and maybe thinks that she has too little pride. The Duke took offence by this as he thought it disgraced his 900 year old name, instead of telling her how he was annoyed he ruthlessly "gave commands" making "smiles stopped altogether". This tormented the duke as he saw his name (Ferrara) as a very special gift and thought she was abusing it. Although she should have reserved her smiles for the Duke and nobody else it was still an extreme decision and shouldn't have been taken. "There she stands as if alive" is then repeated just after when he "gave commands" which gives a sinister effect as it was he himself who "gave commands". Just because she was eccentric to other people who are inferiority to her doesn't give him the right to draw the curtain for his duchess. It is arguable that the Duke was jealous, as he wouldn't gloat her when she was alive but does when she is dead. Although the poem starts with a light tone when he describes her picture, there is a later a detectable change where he starts to express his feelings. ...read more.

During the end of the poem we see his sadness that if he were to see her again he would greet her with "Silence and tears" as it would bring back all his haunted memories. From these poems I conclude that love is a very precious thing to have, but can also turn into hate and regret as we discover in Lord Byron's poem. It's clear that Shakespeare sees' love to be precious whereas this is less evident in the other two poems. This is shown as Lord Byron's poem is all about dwelling, shame and hurt which makes him feel so disgusted with his lover that he can't bare to hear her name again. We see an unhappy relationship, which turns into obsession and turns in contrast to absolute hate. My Last Duchess also tells a bad experience with love which ends in the most extreme action. Shakespeare says that it is not love if it changes, but I disagree because there are all sots of possibilities. For example your lover could cheat on you. Shakespeare's poem shows how love should be judged and how good it is when you have it. All in all I would say that love is a very delicate thing, which is precious whilst you have it and to be cautious not to damage the relationship, it is also short and can be unpredictable so make the most of it. Andrew Pitt 11Ma English Mr.Mar ...read more.