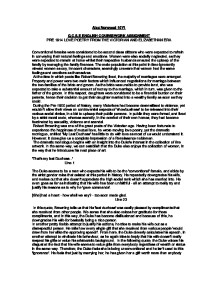 Pre 1914 love poetry from the Victorian and Elizabethan era.

Alex Norwood 10Y1 G.C.S.E ENGLISH COURSEWORK ASSIGNMENT PRE 1914 LOVE POETRY FROM THE VICTORIAN AND ELIZABETHAN ERA Conventional females were considered to be second class citizens who were expected to refrain in conveying their natural feelings and emotions. Women were also socially neglected, as they were expected to remain at home whilst their respective husbands ensured the upkeep of the family by managing the family finances. The male population at this point in time ignorantly viewed women as coy, innocent characters, seemingly unaware that women had the same feelings and emotions as themselves. At the time in which poets like Robert Browning lived, the majority of marriages were arranged. Property and power were two main factors which influenced negotiations for marriage between the two families of the bride and groom. As the bride was unable to provide land, she was expected to take a substantial amount of money to the marriage, which in turn, was given to the father of the groom. In this respect, daughters were considered to be a financial burden on their parents, hence their decision to get their daughter married into a wealthy family as soon as they could. During the Pre 1900 period of history, many Victorians had become desensitised to violence, yet wouldn't allow their views on controversial aspects of 'showbusiness' to be released into their various social circles, in a bid to upkeep their public persona. In public they were formal, and lived by a strict moral code, whereas secretly, in the comfort of their own homes, they had become fascinated by sexuality, violence and scandal. Robert Browning was one of the great poets of the Victorian age. Having been fortunate to experience the happiness of mutual love, he wrote moving love poetry, yet the dramatic monlogue, entitled 'My Last Duchess' has little to do with love as most of us would understand it. However, it does give us a complete impression of a Renaissance nobleman. ...read more.

Lines 58 - 59 Finally, the speaker mentions that 'God has not said a word'. Once again, he attempts to justify to himself that he has done nothing wrong by reassuring himself that had he done anything wrong, he would have been punished by God. The second type of love that grabbed the attention of many Victorians was poems of seduction. This was also the most successful 'genre' of poem in the Elizabethan era, and one of the more famous poems of seduction to come from this period of history is Andrew Marvells, 'To His Coy Mistress'. 'To His Coy Mistress' is a 'metaphysical' poem. In it, the poet constructs an argument in an attempt to make his lady see things from his point of view. However, at times, it does seem more than a seduction poem. The first stanza is fabricated of words and phrases that are used in an attempt to flatter the lover of Marvell. From the opening few lines, we can gather that his lady his coy, and in the same sense, the 'conventional' female. However, it seems that Marvell is impatient and does not really want to wait for her and so uses flattery in order to speed up the process of deliberation on her part. 'Had we but world enough, and time, This coyness, Lady, were no crime.' Stanza 1. 1 - 2 Marvell then goes on to use a comparison of the Ganges rand the Humber to differentiate between their current suroundings. He speaks of the riches that surround the girl whilst by the Ganges, and of the dull, boring surroundings that the poet is witnessing by the Humber. In the same way, we can also interpret this statement as an insight into the current psychological state of Marvell - he feels dull and boring as if he is by the Humber, whilst his lady is full of life and enjoying herself, as if she were by the Indian Ganges surrounded by riches. ...read more.

In 'First Love', we hear about how the speaker's 'face turned pale as deadly pale' after being 'struck' by the power of love. In 'Porphyria's Lover' we hear about how a 'sudden thought of one so pale' would refrain his lady from attending social functions and instead be with him. This signifies the effect that love has had on the speaker's emotions, as he waits for his lady to call, alone and ill with love. We suspect from the information given that the lady that the knight dreams about is possibly more than she seems, and has hypnotised the knight with her powerful charm and beauty. The significance of the knight's dream is that a man, with extreme power and bravery has been reduced to a lovesick fugure, emphasising the power of love. 'I met a lady.... Full beautiful - a faery's child, Her hair was long, her foot was light. And her eyes were wild.' Stanza 4. Lines 1 - 4 The poet uses nature to reflect emotion in the poem by using positive nature to reflect a positive mood and negative language to reflect a dark, unhappy mood. 'I met a lady in the meads...' 4.1 'On the cold hill's side...' Stanza 9. Line 4 The poem is actually quite sad because the poet truly fell in love with the faery and hoped his love was requited, but the faery was infact taking him for a fool and did not really care about how much she hurt the knight in the process of her fun and games. At the time of writing the poem, Keats must have been feeling strong emotions to link enchantment and magic to love and its effects on others. The poems that we have studied were written in the Pre 1900s, and the majority share the same conventions - jealous lovers, love triangles and violence. Enthralling poems like these, along with plays of similar plotlines, fed the hunger of the majority of Victorians for more sexuality, violence and scandal. ...read more.