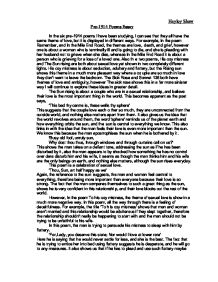 Hayley Shaw Pre-1914 Poems Essay In the six pre-1914 poems I have been studying, I can see that they all have the same theme of love, but it is displayed in different ways. For example, In the poem Remember, and In the Mile End Road, the themes are love, death, and grief, however one is about a woman who is terminally ill and is going to die, and she is pleading with her husband not to grieve when she dies, whereas In the Mile End Road it is about a person who is grieving for a loss of a loved one. Also the two poems, His coy mistress and The Sun rising are both about sexual love yet shown in two completely different lights. His coy mistress is about seduction, adultery and flattery, but the Rising sun shows this theme in a much more pleasant way where a couple are so much in love they don't want to leave the bedroom. The Sick Rose and Sonnet 138 both have themes of love and ambiguity, however The sick rose shows this in a far more sinister way I will continue to explore these ideas in greater detail. The Sun rising is about a couple who are in a sexual relationship, and believe their love is the most important thing in the world. This becomes apparent as the poet says, 'This bed thy centre is, these walls thy sphere' This suggests that the couple love each other so much, they are unconnected from the outside world, and nothing else matters apart from them. It also gives us the idea that the world revolves around them, the word 'sphere' reminds us of the planet earth and how everything orbits the sun, and the sun is central to everything we know. ...read more.

It tells us that this poem isn't about happiness, but destruction. This also links in with my idea of sexual assault. The word 'destroy' makes us think that something had been ruined, or spoiled, which then immediately leads to think that the word 'destroy' is referring to the loss of virginity and purity. We know that this poem is from 'The songs of innocence and experience', which is about moving from innocence to experience. So then the reader believes that this poem is about a woman, who was innocent, which we know links to virginity, but changes to being experienced, which links to loss of naivety and purity. Sonnet 138 by Shakespeare is about dishonesty, and how a couple's relationship is built on lies. 'When my love swears that she is made of truth, I do believe her, though I know she lies,' When we first read this poem we believe that it is about a couple who lie to on another, just to flatter each other. 'Therefore I lie with her, and she with me, And in out faults by lies we flatter'd be.' However, Shakespeare says 'I lie with her'. The use of the word 'with' suggests that the word 'lie' doesn't mean being untruthful, but lying down with her, as in having a sexual relationship, because we don't normally say that we lie with one and other, we lie to one and other. Shakespeare uses this pun to make us think, and work out what the poem is actually about. Therefore I think Shakespeare deliberately said this to give the poem a double meaning. Another reason why we believe this is, 'That she might think me of some untutor'd youth, 'Untutor'd youth' suggests naivety. ...read more.

The poet uses enjambment before the final line, 'I forgot My only love was dead' The lack of punctuation here makes the reader read through this poem quicker. By doing so the last line has more impact. This is good because the last line is the most important line in the poem, because at this point we know what the themes of this poem are. The theme of love is shown through this, that when one loves someone so much its hard to forget them, and put them to the back of your mind. This is similar to the way love is portrayed in the poem Remember, where someone is asking a loved one not to grieve. The structure of this poem reinforces these ideas. The poem is in two quatrains Which is typical of many poems. This shows us that grief is a process that many people go through, and a lot of people go through this in the same ways and there is a typical grieving pattern, like there are typical patterns within poem. However, the use of lots of punctuation in this poem breaks up the rhythm. This reflects in the themes of the poems because people cope with grief differently, also it takes longer for some people to get over a loss. Therefore the way the poem is broken up suggests that there is no universal grieving pattern, like there is no regular rhythm of the poem. From reading and analysing six poems on the same theme of love. We can come to the conclusion that love can be explored in many different ways. Love is a broad subject, and these poems prove that there are many different aspects of love that one can write about, using different methods of expressing them. ...read more.