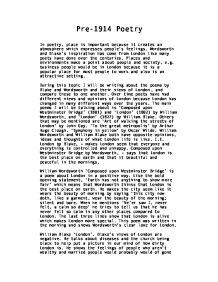 Pre-1914 Poetry In poetry, place is important because it creates an atmosphere which expresses people's feelings. Wordsworth and Blake's inspiration has come from London like many poets have done over the centuries. Places and environments make a point about people and society, e.g. business people would be in London because it is a popular place for most people to work and also is an attractive setting. During this topic I will be writing about the poems by Blake and Wordsworth and their views of London, and compare these to one another. Over time poets have had different views and opinions of London because London has changed in many different ways over the years. The main poems I will be talking about is 'Composed upon Westminster Bridge' (1801) and 'London' (1802) by William Wordsworth, and 'London' (1827) by William Blake. Others that may be mentioned are 'Art of walking the streets of London' by John Gay. 'To the great metropolis' by Arthur Huge Clough. 'Symphony in yellow' by Oscar Wilde. William Wordsworth and William Blake both have opposite opinions, ideas and thoughts of what London life is like. I.E. London by Blake, - makes London seem that everyone and everything is controlled and unhappy. Composed upon Westminster Bridge by Wordsworth, - says that London is the best place on earth and that it beautiful and peaceful in the mornings. ...read more.

You can tell it's a negative poem because he says 'if symbols of wealthy are all that makes a capital then London is one' and 'Only capitalist values and London has no qualities'. Whereas, 'Symphony in yellow' by Oscar Wilde, is a positive poem. It talks about summer autumn and winter, all in positive ways. You can tell it is positive because when he talks about fog it says how is maybe soft and silky. It is a colourful poem but there are some signs of greed. 'The art of walking the streets of London' by John Gay, is both negative and positive. It starts of negative and ends positive. This is as it goes through the seasons. It starts off negative by saying ' dirty waters' which means there were no toilets and people would probably have thrown their waste out the windows. You can tell its getting positive as you go through because it starts talking about the trade mark getting better and more successful. Wordsworth (composed upon Westminster bridge) uses similes ('like a garment') and personification ('the river glideth at his own sweet will'); because these helps establish the poet point of view by his choice of comparison he finds whether he sees the subject in a positive light of a negative one e.g. he has linked 'like a garment' to the beauty of the morning because the garment is normally beautiful. ...read more.

John Gays poem started negative and ended positive. John made his poem sound lively and rhythmic, almost song like. The rhyme scheme is 8 pairs of rhyming couplets. Arthur Hugh Clough was negative. He's used the structure to show a change in the after octet and explains in detail what he likes and dislikes. Oscar Wilde was positive. The 'symphony in yellow had a regular rhythm and rhyme. It has 3 stanzas, which are all equal lengths. (abba, cddc, effe). In 'London' by Blake he has underlying messages. E.g. about the church being in an unstable way by saying 'every black'ning church appalls' which is saying that the church could be black from soot and dirt or it could be a metaphor saying that church does not help those in need. Whereas William Wordsworth in 'Composed upon Westminster Bridge', says 'in his first splendour, valley, rock or hill' he is saying that he feels the city is better clean and natural. To summarise, all poets talk about London but all in their own ways, positive or negative. London inspired all the poets in different ways, some about the state of the people and society, some about the beauty, and then some through devastation of the way people are treated and how some people's life style are. All the poets have different views but all of which are strong arguments and points which all of London conceive. ...read more.