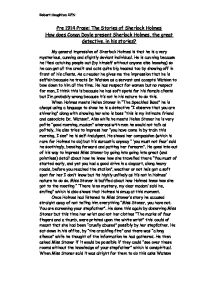 Pre 1914 Prose: The Stories of Sherlock Holmes How does Conan Doyle present Sherlock Holmes, the great detective, in his stories? My general impression of Sherlock Holmes is that he is a very mysterious, cunning and slightly deviant individual. He is cunning because he likes catching people out (by himself without anyone else knowing) so he can get all the credit and acts quite big headed too by showing off in front of his clients. As a reader he gives me the impression that he is selfish because he treats Dr Watson as a servant and accepts Watson to bow down to him all the time. He has respect for women but no respect for men, I think this is because he has soft spots for his female clients but I'm probably wrong because it's not in his nature to do this. When Holmes meets Helen Stoner in "The Speckled Band" he is always using a language to show he is a detective "I observe that you are shivering" along with showing her who is boss "this is my intimate friend and associate Dr. Watson". Also while he meets Helen Stoner he is very polite "good morning, madam" whereas with men he would not talk as politely. He also tries to impress her "you have come in by train this morning, I see" he is self-indulgent. He shows her compassion (which is rare for Holmes to do) but it's sarcastic anyway " 'you must not fear' said he soothingly, bending forward and patting her forearm". ...read more.

Mr Jabeez Wilson previously was a "freemasonry" which is large group of people who do things for each other which involve their jobs. He observes Mr Jabeez Wilson a lot, it's almost like forensic evidence "and the left cuff with a smooth patch near the elbow where you rest it upon the desk". Homes just keeps on coming up with new qualities "the fish which you have tattooed immediately above your right wrist could only have been done in China" so he is an expert on tattoos now as well. Then he starts talking about totally irrelevant information "the trick of staining the fishes' scales a delicate pink is quite peculiar to China" just to show off whereas all along he could of just said that he had been to China. The meeting between Miss Stoner is similar to this meeting as we see Holmes exhibiting his powers of observation in which case can be said he is showing off but it is also possible that Holmes does this to put his clients' mind at rest. In "The Man with the Twisted Lip" shows his unusual abilities as a detective by going in disguise to an opium place and not even being recognised by his companion Watson "As I passed a tall man who sat by the brazier I felt a sudden pluck at my skirt, and a low voice whispered 'walk past me, and then look back at me' ". Even when Watson looks back at Holmes he still doesn't recognise him but once he did he was greatly shocked to see his ...read more.

In "The Man with the Twisted Lip" he shows that he is big-headed and likes to take all of the glory "Holmes stooped to the water jug, moistened his sponge, and then rubbed it twice vigorously across and down the prisoner's face. The reader's perception of Holmes changes as a result of him being so cunning and of him being able to know for definite that the criminal he is about to catch/find is the right one and he has made no mistakes at all in all the clues that he found along the way of his investigation. In conclusion I think that Sherlock Holmes has been recognised as the template of all future literary detectives because Conan Doyle has made Sherlock Holmes a very interesting character by making him a man of action and great strength like in "The Red-Headed League" where he jumps out of the shadows lights his lamp and "seized the intruder by the collar". Sherlock Holmes reminds of many detectives and one of them is inspector Gadget as they both use magnifying glasses (which the television probably thought of by using Holmes as an example) and they both were long cloaks and "detective" hats. I thought that "The Man with the Twisted Lip" because that to me was the case with the least clues and the fact that the criminal that supposedly killed Mr Neville St Clair was actually him in disguise, I liked this case because it had Holmes at the start doing exactly what Mr Neville St Clair was trying to do all of the time. ?? ?? ?? ?? Robert Houghton 11FN ...read more.