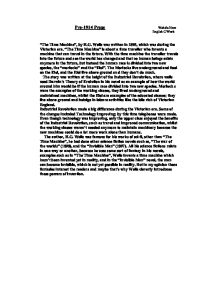 Pre-1914 Prose Wahida Noor English C/Work "The Time Machine", by H.G. Wells was written in 1895, which was during the Victorian era. "The Time Machine" is about a time traveller who invents a machine that can travel in the future. With the time machine the traveller travels into the future and see the world has changed and that no human beings exists anymore in the future, but instead the human race is divided into two new species, the "morlocks" and the "Eloi". The Morlocks live underground and feed on the Eloi, and the Eloi live above ground and they don't do much. The story was written at the height of the Industrial Revolution, where wells used Darwin's Theory of Evolution in his novel as an example of how the world around him would be if the human race divided into two new species. Morlocks were the examples of the working classes, they lived underground and maintained machines, whilst the Eloi are examples of the educated classes; they live above ground and indulge in leisure activities like the idle rich of Victorian England. Industrial Revolution made a big difference during the Victorian era. Some of the changes included Technology improving; by this time telephones were made. ...read more.

Wells also describes the Eloi's as an attractive race, you can see this in the quote: "...Dresden china type of prettiness" these shows the Eloi are so pretty that they look like they have been made. Wells uses Darwin's theory of Evolution as an example of how the human race would look like in the future, because Darwin's Theory of Evolution states that all human beings descended from monkeys that are believed to be our ancient ancestors. So Wells uses this theory in his novel as an example of how the human race would develop into the Eloi overtime in the future. During the 1800s, as people moved to the cities in Victorian England, violent crime increased as well, an example is Jack the Ripper. Wells was concerned with this and so included a violent theme in the novel; the Eloi needed the morlocks to maintain machinery and the morlocks needed the Eloi for food; therefore they have a violent symbiotic relationship. This storyline links with the relationship between the working classes and the educated classes of the Victorian age because the working classes and the upper classes had little social connections, yet they needed each other - without the educated classes, the ideas of the Industrial Revolution wouldn't have happened, and without the working classes these ideas wouldn't ...read more.

I think that the director decided to show the story in a different way because he probably considered that people wouldn't want to watch the film in old fashion text, so that's why he probably decided to change the storyline partially. ""The Time Machine" by H.G. Wells illustrates life in Britain at the end of the Victorian era" I think I will agree with this statement to some extent, because H.G. Wells did use some examples to illustrate life in Britain from the things going on in the world around him, such as Darwin's Theory of Evolution, the relationship between the rich and poor of the Victorian age and also Jack the Ripper which influenced him to write a violent theme in his novel. He included all this but interpreted them in other ways so that his novel wasn't very similar to what he saw around him in Britain at the end of the Victorian era. On the other hand, it could be argued that Wells was writing a pure imaginative text, whereby he intended to interest readers and was perhaps using some examples from the things happening in Britain during his time to help him, so therefore Wells might be contrasting real life with fantasy. ...read more.