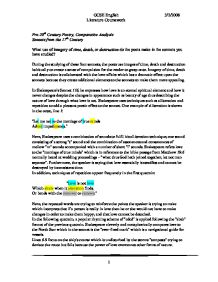 Pre-20th Century Poetry, Comparative Analysis Sonnets from the 17th Century What use of imagery of time, death, or destruction do the poets make in the sonnets you have studied? During the studying of these four sonnets, the poets use images of time, death and destruction habitually to create a sense of compulsion for the reader to grasp onto. Imagery of time, death and destruction is collaborated with the love-affairs which has a dramatic effect upon the sonnets because they create additional elements to the sonnets to make them more appealing. In Shakespeare's Sonnet 116, he expresses how love is an eternal spiritual element and how it never changes despite the changes in appearance such as beauty of age thus describing the nature of love through what love is not. Shakespeare uses techniques such as alliteration and repetition to add a pleasant poetic effect to the sonnet. One example of alliteration is shown in the octet, line 1: "Let me not to the marriage of true minds Admit impediments." Here, Shakespeare uses a combination of sounds to fulfil his alliteration technique; one sound consisting of a strong "t" sound and the combination of assonances and consonances of mellow "m" sounds accompanied with a number of short "i" sounds. ...read more.

In addition, these negative words are in juxtaposition before love thus Shakespeare makes it clear that the speaker has full faith in his own words. Overall, the mood of this sonnet starts with a soft, mellow tone and then changes dramatically by introducing the inevitable nature of death. This sonnet is an excellent piece of literary subject of love using powerful descriptions literary tools such as metaphors and alliteration and further using strong images of time accompanied with subtle images of death and destruction. In John Donne's On Death, he personally reminds readers that death is nothing to be afraid of since it cannot overpower anything. This sonnet focuses more on John Donne's personality and emotions towards death as opposed to Sonnet 116 which focuses more of the nature of love against time and destruction. Donne addresses death as an abstract figure to make the tone of the poem more humble instead of as if he were talking about death as an element which delivers a more worrisome tone. In the first quatrain, Donne begins with a command to death telling it "be not proud". This gives an instant impression that he is talking to death in the face as if it is laughing at its acts. ...read more.

Clearly, the effects Donne has applied here relate to the final triumph over Death and its existence will be no more. He gives the impression that he believes in the second coming of Jesus Christ when the dead shall wake up eternally and there shall be no death. Throughout the whole poem, he disrespects death because in the end it shall be defeated and eradicated and the living will prevail. Between the two sonnets, images of time and death in particular have been clearly mentioned and the two poets use them to great effect. However Donne uses less literary techniques in order to grab the reader's attention but he replaces that with the constant mention of overwhelming death and summarises in the last line, combining the consolation of the Christian faith with the contradictory idea of Death vanishing instantly. Shakespeare on the other hand has used his literary tools to the greatest effect using metaphors to stress how love is the ultimate beauty of nature but his images are much more subtle compared to Donne's sonnets thus striking the reader with weaker ingredients. On Death is much stronger but Sonnet 116 delivers the message much more easily since the contents of On Death leave us with questions about the true meaning of death as it focuses more on Donne's affairs which gives the reader the sense that he is patronising and being sarcastic towards death but secretly, he is besieged by death. ...read more.