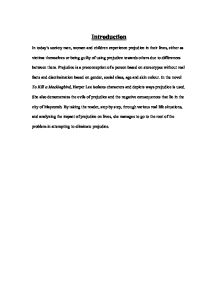 Prejudice in the novel To Kill a Mockingbird

Introduction In today's society men, women and children experience prejudice in their lives, either as victims themselves or being guilty of using prejudice towards others due to differences between them. Prejudice is a preconception of a person based on stereotypes without real facts and discrimination based on gender, social class, age and skin colour. In the novel To Kill a Mockingbird, Harper Lee isolates characters and depicts ways prejudice is used. She also demonstrates the evils of prejudice and the negative consequences that lie in the city of Maycomb. By taking the reader, step by step, through various real life situations, and analyzing the impact of prejudice on lives, she manages to go to the root of the problem in attempting to eliminate prejudice. Prejudice leads to many consequences. In the book to Kill a Mockingbird Harper Lee shows us how the evils of prejudice impact our lives. In the Maycomb county blacks are always discriminated. Tom Robinson a black man is accused of raping Mayella the daughter of Bob Ewell. The case is taking to court and even though it is obvious that Tom is innocent he is still convicted. ...read more.

These different types of prejudice are all commited in the book and show how prejudice is an awful way of judging people. All men and women are created equal and have the same rights. Prejudice against gender lurks in the city of Macomb. Mrs. Maudie experiences this unfairness in the novel due to the fact that she is a woman. "Miss Maudie can't be on a jury because she's a woman"(Lee 221) is a fact that cannot be contradicted in Maycomb County. The prejudice is against women. Townsmen think that women are frail and emotional so they will not be able to witness such intense trials. It takes a man to be on a jury is a common belief by most of the townspeople. This belief should be eliminated because this is not true and if a woman wants to be on a jury and she qualifies then she deserves a spot ion the jury. Men and woman should have equal opportunities and should have the same rights. It is not only adult that commit prejudice, Harper Lee shows us that children also innocently follow the footsteps of the wicked and learn bad manners. ...read more.

This is a sign to the reader that more characters are eventually going switch over to the good side and that is xactly what happens. Jem and Scout are both children and their minds have not fully developed yet and we cannot give them the 100% guilt to them for being a little prejudice towards others. Nevertheless the children also manage to overcome prejudice. "We never put back into the tree what we took out of it; we had given him nothing, and it made me sad." (Lee 278) The children realized the wrongfulness of assuming that Boo Radley was crazy. Scout now realizes that Boo is a human just like anyone of us and we should all be treated equally. "It is a sin to kill a mockingbird" is a lesson that Scout has learned from her dad. She realized that Boo was represented by a mockingbird and she was the so called hunter. Now Scout has grown and matured and she followed after the footsteps of her dad and manged to get rid of the evil assumptions towards Boo Radley. Harper Lee through the portrayal of these major characters has shown us how they realized that prejudice in Maycomb she not be existed and they all manage to isolate prejudice from their lives and eliminate it in an understanding manner. ...read more.