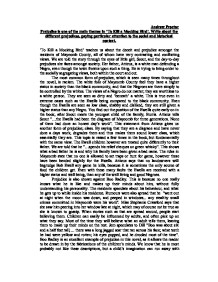 Prejudice is one of the main themes in 'To Kill a Mocking Bird'. Write about the different prejudices, paying particular attention to the social and historical context.

Andrew Proctor Prejudice is one of the main themes in 'To Kill a Mocking Bird'. Write about the different prejudices, paying particular attention to the social and historical context. 'To Kill a Mocking Bird' teaches us about the deceit and prejudice amongst the residents of Maycomb County, all of whom have very contrasting and conflicting views. We are told the story through the eyes of little girl, Scout, and the day-to-day prejudices she faces amongst society. Her father, Atticus, is a white man defending a Negro, even though the town frowns upon such a thing. He is trying to bring order to the socially segregating views, both within the court and out. The most common form of prejudice, which is seen many times throughout the novel, is racism. The white folk of Maycomb County feel they have a higher status in society than the black community, and that the Negroes are there simply to be controlled by the whites. The views of a Negro do not matter; they are worthless to a white person. They are seen as dirty and 'beneath' a white. This is true even in extreme cases such as the Ewells being compared to the black community. Even though the Ewells are seen as low class, shabby and disliked, they are still given a higher status than any Negro. You find out the position of the Ewells quite early on in the book, after Scout meets the youngest child of the family, Burris. ...read more.

This is a prejudice action, because Calpurnia is as good a role model as Aunt Alexandra, if not better. She would not give Scout and Jem prejudice views on different parts of society, but a fair viewpoint on all matters. Aunt Alexandra is a bigot and doesn't see the character of Calpurnia, just the colour of her skin. Calpurnia has been with the children since they were very young, so knows them a lot better than Aunt Alexandra does. A different sort of racism arises when Calpurnia takes the Finch children to her local, Black community church. Instead of the usual racist remarks against black people, it is the other way around and the Finch children are being prejudiced against. It is not the whole of the black community however that is being prejudice against them, just one Negro woman named Lula. The rest of the Negroes show respect to Scout and Jem, but she wants to know why Calpurnia is "bringin' white chillun to nigger church". She obvious has very stereotypical views of white people, so much that they are extended to the white children. The Finch children now know what the Negroes have to deal with every day, and it gives them a new perspective on how to treat people. Another strong form of prejudice that has been shown throughout the years is sexism. For many years' men felt they had power over women, and exerted it. ...read more.

The court case is one of the main parts to the book, and involves many of the already mentioned prejudices. The main one is of course racism against the black man, Tom Robinson. He has been accused of raping Mayella Ewell. As I mentioned earlier, the Ewells are thought of as the "trash" of Maycomb, yet they still have power over Tom Robinson who is a respectable and well doing black man. When the trial begins, everyone already knows what the outcome will be, which just goes to show what everyone thinks of the black community; worse than trash. The prosecution in the trial is very harsh, and although the trial goes on, everyone knows that the verdict will be guilty. Tom Robinson has been discriminated by a biased community, a community of Negro haters. Tom is found guilty, even though the evidence given proves him to be innocent. Tom was never given a fair chance in the trial. The guilty verdict is the result of a racist community. As I have said, prejudice is a key factor in 'To Kill a Mockingbird'. It sets storylines, gives people different opinions and makes people biased towards different issues. It just shows how life was in the 1930's, and the way that race, sex, class and religious prejudice has changed over the years. People were scared to voice their opinions, afraid of what the community might say if they did. If this had been changed and people weren't so biased that maybe that innocent man would have lived, and people would not have been so discriminative to one another. ...read more.