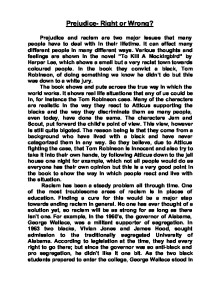 Prejudice- Right or Wrong? Prejudice and racism are two major issues that many people have to deal with in their lifetime. It can effect many different people in many different ways. Various thoughts and feelings are shown in the novel "To Kill A Mockingbird" by Harper Lee, which shows a small but a very racist town towards coloured people. In the book they convict a black, Tom Robinson, of doing something we know he didn't do but this was down to a white jury. The book shows and puts across the true way in which the world works. It shows real life situations that any of us could be in, for instance the Tom Robinson case. Many of the characters are realistic in the way they react to Atticus supporting the blacks and the way they discriminate them as many people, even today, have done the same. The characters Jem and Scout, put forward the child's point of view. This view, however is still quite bigoted. The reason being is that they come from a background who have lived with a black and have never categorized them in any way. So they believe, due to Atticus fighting the case, that Tom Robinson is innocent and also try to take it into their own hands, by following Atticus down to the jail house one night for example, which not all people would do as everyone has their own opinion but this is a very good point in the book to show the way in which people react and live with the situation. ...read more.

He has had to defend many cases with blacks and he handles the situation in his old way. A calm, laid back, gentle man many residents of Maycomb knew him for. The trial for Tom Robinson changes Atticus's life and the Tom's life, just like it would anyone else. Atticus suffered being spat at on the street corner by Mr Ewell, whereas before the famous court case this would never have happened as, regardless of his views being that all blacks should be treated the same way that everyone else is treated in the town, he was respected, for example "if your father's anything, he's civilised in his heart". He was also played a big part in the town and community just as everyone else did. Tom, the accused, doesn't suffer any abusive actions towards him but he suffers much worse. Death. He was shot not once, not twice but twelve times in the head for trying to escape the awful nightmare that was prison. "To Kill a Mockingbird" could be considered a reliable and unexaggerated portrait of southern American's prejudice because the author Harper Lee based Maycomb, the setting for the book , on a real place, Monroeville, and the character Atticus on Harper Lee's father who was a lawyer. Having the book so accurate, the author can then hit the reader with more impact and can express her views on prejudice and discrimination with stronger force and more focus. ...read more.

They have fought back, and they've fought back viciously and, less often, peacefully. There have been some very powerful black speakers, one of which is the very famous Martin Luther King. Even though racism has been abolished in most places, it still exists and what has happened in the past will always be there to scar our history. Unfortunately, there will always be sick people in this world, fundamentalists who don't know when to stop. They take things too far and a rebellion, by the blacks, was bound to happen. It may have been bloody but if it wouldn't have happened, then who knows what the world would have been like. Lots of different people have different views on the two but I know what I think. Too many people have got away with racial or prejudicial behaviour and nothing has been done to stop them. Luckily, they are trying to come down hard on those who have been the abusers but again it won't stop them. With the book, Atticus' courage was one with the same likeness of Martin Luther King's, his fame made by a "I Have A Dream..." speech trying to stop racial abuse. He went against all odds, problems, humiliation, shame, distrust, even discrimination against himself, to follow through with something in which he believed in. After all of this effort, he wasn't even rewarded with justice. The jury itself is racist. It was an unfair world back then, and, unfortunately, in some places, it still is today. ?? ?? ?? ?? ...read more.